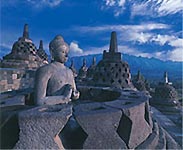 The islands and people of Indonesia constitute the fourth most populated nation in the world. As a democratic republic, Indonesia is divided into 30 provinces and special territories and classified geographically into four groups. First are the Greater Sundas, made up of the larger islands of Sumatra, Java, Kalimantan and Sulawesi. Second are the Lesser Sundas, consisting of smaller islands from Bali eastward to Timor. Third is Maluku, which includes all the islands between Irian Jaya and Sulawesi. The fourth and final group is lrian Jaya in the extreme eastern part of the country.

There are about 583 languages and dialects spoken in the archipelago. Bahasa Indonesia is the national language, which is akin to Malay, written in Roman script and based on European orthography. In all tourist destination areas English is the number one foreign language fairly spoken and writer, whereas some Dutch is till spoken and understood in the bigger cities and French increasing in its popularity at the better hotels and restaurants.

Whether you wish to get some tan at white-sand beaches, having gentle breeze blowing your hair over calming lakes, or scaling high mountains, Indonesia is the place to visit.

Aside of species of fauna familiar to both Asia and Australia, there are species indigenous to Indonesia. The orang utan apes of Sumatra and Kalimantan, the giant komodo lizards roaming free on the island of Komodo, the one-horned rhinoceros of Java, the wild banteng (oxen), tigers and many other species which are now protected in wildlife reserves. 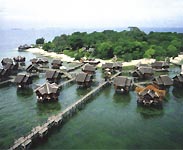 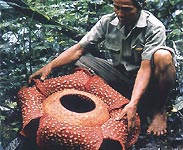 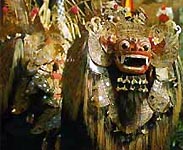 Being located near the equator, Indonesian climate is divided into two: dry and rainy seasons. Most of Indonesia has their rainiy seasons from October through April, but certain places like Maluku have theirs from March to August. During the rainy season, rain starts around noon and lasts into the afternoon. Some areas can have sudden showers for more than two hours.

Bunaken, in North Sulawesi has superb clarity of water and a wide choice of dive locations with step and pristine walls smothered with hard and soft coral. Take Bone Rate, in South Sulawesi is the third largest atoll in the world. Southeast of Ambon (Maluku province), also rises a tiny cluster of emerald islands, the Banda Islands, famous for their pristine waters and immaculate reefs.

Flying is arguably the easiest and most comfortable means of travel over long-distance in Indonesia. There are many commercial airlines running both international and domestic routes. Garuda Indonesia, the national flag carrier, operates both international and domestic routes. Domestically it serves 33 cities, including all the provincial capitals.

DVD Aquarium - widescreen
Watch your screen come to life as it turns into your own personal Aquarium. Now in widescreen format.
$AU 19.95
10% Cardholder's Discount!

It is with great pride that we announce the first official sanctions in our No Take Zone. Last week our Rangers encountered two fishing boats laying gill nets about 30 minutes north of the resort. The illegal fishermen were intercepted on a routine patrol of our 1220 sq km No-Take Zone.

After two weeks of diving around Ambon and the Banda islands, northern Bali offered the perfect place to chill out. A peaceful stretch where you can experience the real Balinese lifestyle