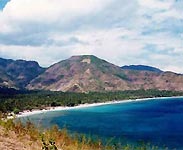 Lombok is part of the chain of the Lesser Sunda Islands, with the Lombok Strait separating it from Bali to the west and the Alas Strait between it and Sumbawa to the east.

The Lombok Strait marks the passage of the biogeographical division between the fauna of the Indomalayan ecozone and the distinctly different fauna of Australasia that is also known as the Wallace Line.

The island's topography is dominated by the centrally-located volcano Mount Rinjani, which rises to 3,726 m making it the third-largest in Indonesia. The most recent eruption of Rinjani was in June-July 1994. The volcano, and its sacred crater lake, are protected by a National Park established in 1997.

Lombok has much in common with nearby Bali, but less well-known and less-visited by foreigners. It has been working to increase its visibility to tourists in recent years, promoting itself as an "unspoiled Bali". The most-developed center of tourism is Senggigi, spread in a 10-kilometer strip along the coastal road north of Mataram.

The Gili Islands, an archipelago of three small islands just off the northwest coast of Lombok called Gili Trawangan, Gili Meno and Gili Air; are a popular destination for Western tourists looking for a remote island experience. Each island has several small resorts, usually consisting of a small collection of huts for tourists, and a restaurant. Automobiles and motorized traffic are prohibited on the islands, so the preferred method of transportation is bicycle or the horse-drawn carriage. 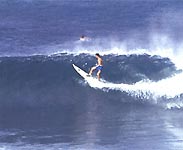 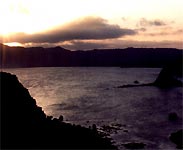 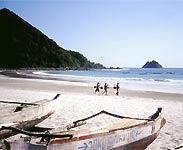 Diving in and around the Gilis is the most popular in this region with the number of dive centres expolding in recent years.