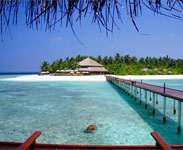 The Republic of Maldives is an island nation in the Indian Ocean formed by a double chain of twenty-six atolls. The atolls of the Maldives encompass a territory spread over roughly 90,000 square kilometers, making it one of the most dispersed countries in the world in geographic terms. It features 1,192 islets, of which two hundred are inhabited.

The Maldives is the smallest Asian country in both population and area. With an average ground level of 1.5 metres (4 ft 11 in) above sea level, it is the lowest country on the planet. 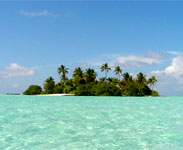 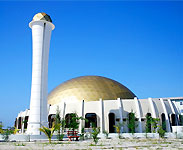 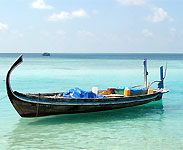 A dhoni without lateen sails

The Indian Ocean has a great effect on the climate of the country by acting as a heat buffer, absorbing, storing, and slowly releasing the tropical heat. The temperature of Maldives ranges between 24 °C (75 °F) and 33 °C (91 °F) throughout the year. Although the humidity is relatively high, the constant cool sea breezes keep the air moving and the heat mitigated.

Maldives waters are home to wide variety of ecosystems, but it is most noted for their variety of colorful coral reefs, home to 300 species of fish. Seven species have been described as new to science, several more await description. Over 400 have been identified and catalogued and many are now held in the reference collection, including 5 species of turtles, 51 species of echinoderms, 5 species of sea grasses and 285 species of alga & sponges, crustaceans, and tunicates.

The Maldives, though isolated in location, is easily accessible from anywhere in South-East Asia, the Middle-East and Europe. The Male International Airport is mere fifteen minutes from Male?. The airport is small, but well-equipped with souvenir and duty-free shops, restaurants, medical facilities, and provides banking and postal services.

H2OV Underwater Housing for ContourGPS
The H2OV housing for the Contour GPS camera was designed for technical and recreational SCUBA. Pressure Tested to 400 ft. - 120 m.
$AU