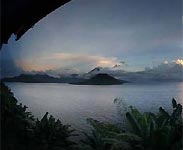 Maluku is blessed with incredible sea gardens, idyllic, tropical beaches and rugged, forest-coated volcanic mountains. These are the famous spice islands which drew Indian, Chinese, Arab and eventually European traders in search of cloves and nutmeg.

In 1511, the Portuguese built their first fort in the area on the island of Ternate, and cornered the clove trade. The Dutch, who arrived in 1599, mounted the first serious threat to Pourtuguese control of Malukus treasures. Armed conflicts broke out, taking a heavy toll from the island populations as well as the rival European powers.

When the Dutch finally emerged as victors they enforced their trade monopoly with an iron fist. Whole villages were razed to the ground and thousands of islanders died, especially on the island of Banda. The British briefly occupied Maluku during the Napoleonic Wars, but Dutch rule was restored in 1814 and it wasnt until 1863 that the compulsory cultivation of spices was abolished in the province. Now fish and other sea products are Malukus major sources of revenue, but nickel, oil, manganese and various kinds of timber also contribute to the provinces wealth. 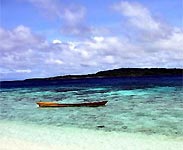 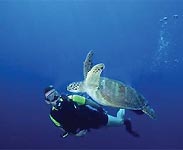 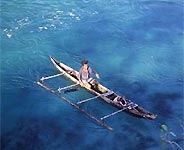 The Banda Islands are one of Indonesias top destinations for divers. Both experts and beginners will enjoy themselves here, as the diving ranges from the shallow lagoon between Banda Neira and Gunung Api to the vertical walls of Hatta Island, the most easterly in the group. The Bandas offer stunning tropical scenery, a remarkable history, friendly villages, and some of the globe's most pristine, biologically diverse coral reefs. Scuba is new here, but the pioneering divers didn't have to work hard for their thrills.

The undersea world around Ambon and the nearby island of Saparua have top-rate dive sites. Highlights among reef walls here are the presence of large marine life - sharks, enormous turtles, schools of Napoleon Wrasse, giant groupers, tuna, rays, and huge lobsters - neighbors to generous schools of reef fish.

The main gateway into Maluku is through the provincial capital Ambon, which is served by regular flights to most parts of the archipelago. Air and sea tranportation connect the islands with 79 seaports and 25 airports. Roads on many of the islands provide acces to the more remote places of interest.

The water is mirror calm, deep blue yet glistening with gold as the sun starts to set. We are sitting on the prow of our phinisi schooner approaching the imposing slopes of Guning Api.

The island of Ambon, part of Maluku Province located in the Eastern parts of Indonesia between Papua and Sulawesi, is not on the travel schedule of many people, however for serious divers this is a destination offering diving away from the crowds as well as some amazing history and culture.