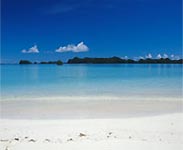 Palau beckons to you with some of the world's most awesome natural wonders. Imagine the whitest beaches you will ever see, gardens of coral just beneath the clearest waters, lakes filled to the brim with "sting less" jellyfish. Forests, waterfalls and caves that have never been ravaged by man, and hundreds of islands of the purest beauty abound all along our pristine archipelago.

Palau's most important islands are Angaur, Babeldaob, Koror, and Peleliu, which lie together near the same barrier reef. About two thirds of the population lives on Koror. North of these islands, the coral atoll of Kayangel is situated, while the uninhabited Rock Islands (Palau) (ca. 70) are situated to the west of the main island group. A remote group of six islands, known as the Southwest Islands, some 600 km from the main islands, is also part of the country.

The Palauans voted in 1979 not to join the Federated States of Micronesia, and chose independence instead. After a long period of transition, including the violent deaths of two presidents, Palau voted in 1994 to become freely associated with the U.S. while retaining their independence.

Palau enjoys a pleasantly warm climate all year round with an annual mean temperature of 27¬?C. Rainfall can occur throughout the year, and the annual average is 150 inches. The average relative humidity is 82%, and although rain falls more frequently between July and October, there is still much sunshine. Typhoons are rare as Palau is located outside the typhoon zone.

Palau has been named one of the Underwater Wonders of the World. An archipeligo surrounded by a fringe reef, Palau's waters are packed with a great diversity of marine life. Go with tour operators that offer day trips from Koror, or stay in the islands in one of Palau's luxurious live-aboards.

From the western seaboard of the United States, you can hop to Hawaii, skip to Guam, then jump to Palau. For a scenic island route, you can do an island hop across Micronesia to Palau. Through Asia, there are twice weekly charter services between Taipei, Taiwan and Palau and additional flights are also available during peak seasons. From Europe, there are now conveniently connecting flights from Frankfurt through Taipei to Palau, or from most European cities via Manila, Philippines.

Ocean Empires
Ocean Empires takes its viewers on a unique journey into the heart of the coral reef - the most extraordinary environment on the planet.
$AU 19.95
10% Cardholder's Discount!

Travelling to Palau was not as easy as we would have liked as we couldn't get direct flights from Australia. Although this was a pretty long journey, it proved a very worthwhile one as diving Palau is just fantastic.

December 2003 saw me head to Guam and Palau for my first underwater experience. For many years now I have been trying to become qualified but things have always gone against me ...