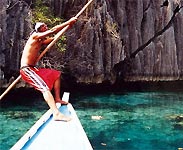 The island province of Palawan has been declared as a nature sanctuary of the world, and for good reason. It is wrapped in a mantel of rainforests, outstanding dive sites, majestic mountains, primeval caves, and pristine beaches. It is surrounded by a coral shelf that abounds with varied and colorful marine life. It boasts of exotic flora and fauna, like the mousedeer and the scaly anteater, that are found nowhere else.

Palawan waters are among the best in the world, not only for diving but also for fishing. A diver's paradise, it has miles of sub-surface coral and rainbow reef walls which surround the coasts and coves teeming with rich marine life.

The El Nido Marine Reserve in Miniloc, El Nido, occupying an area of 96,000 hectares, is a popular nature spot in the province. It boasts of diverse ecosystems, such as rainforests, mangroves, white sand beaches, coral reefs, and limestone reefs as well as a variety of fishes, like manta ray and the sea cow or 'dugong', known as the world's rarest marine mammal. It is now one of the country's premier destinations, blessed with amazing natural scenery, and considered as a sanctuary for various forms of wildlife.

Sta. Lourdes Tagbanua, Puerto Princesa City is where the Honda Bay can be seen. The bay consists of several islets with shallow reefs, bordering fabulous beaches and small resorts which have become the favorite water sports destination of local and foreign tourists alike.

The province boasts of extraordinary scenic wonders. African animals from Kenya in Africa - giraffes and elands, zebras and gazelles - co-exist with endemic Philippine animals, like the Palawan bearcat, mousedeer and peacock (pheasant), in the Calauit Island Wildlife Sanctuary in Busuanga, considered one of the province¬ís most amazing sites. Another sanctuary found in Rio Tuba Village, Bataraza is the Ursula Island Game Refuge and Bird Sanctuary. This island is a haven for birds that rest and converge two hours before sunset, after a day's flight. 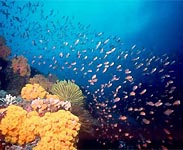 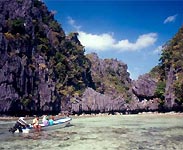 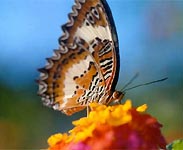 The province has two types of climate. The first, which occurs in the northern and southern extremities and the entire western coast, has two distinct seasons ¬ñ six months dry and six months wet. The other, which prevails in the eastern coast, has a short dry season of one to three months and no pronounced rainy period during the rest of the year. The southern part of the province is virtually free from tropical depressions but northern Palawan experiences torrential rains during the months of July and August. Summer months serve as peak season for Palawan. Sea voyage is most favorable from March to early June when the seas are calm.

Busuanga Island, whose main town is Coron, is the jump-off point for numerous dive operators. The principal dive sites are 12 WWII Japanese shipwrecks sunk on September 24, 1944 by US Navy action. They range in depth from the surface to 40m. This large variety offers exciting wreck exploration for enthusiasts, from novice divers and snorkelers and recreational divers to experienced TEC divers. Blessed with extraordinary natural scenery, El NidoMarine Reserve is, the sanctuary of various forms of wildlife. Countless varieties of fish are also found here. Manta rays are a common sight; when in season, divers may see one of the world's rarest marine mammal, the sea cow, known locally as 'dugong'.

Palawan can be reached within an hour and five minutes' flight from Manila to the capital city of Puerto Princesa or a 20-hour trip by sea. A choice of regular Philippine Airlines (PAL), Air Philippines or direct-chartered flights can be made, depending on the desired destination.

Storm Case iM2300
Nothing stands up to the power of Storm Cases. The iM2300 meets airline carry-on regulations by fitting under seats and in overhead compartments.
From $AU 231.00
5% Cardholder's Discount!