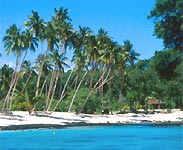 Samoa is located east of the international dateline and south of the equator, about halfway between Hawaii and New Zealand in the Polynesian region of the South Pacific. The Samoas are of volcanic origin and consist of the two large islands of Upolu and Savai'i which account for 96% of the total land area, and seven small islets: Manono, Apolima, Nuutele, Nuulua, Namua, Fanuatapu, Nuusafee and Nuulopa. The main island of Upolu is home to nearly three-quarters of Samoa's population and its capital city is Apia.

The Fa'a Samoa, or traditional Samoan way, remains a strong force in Samoan life and politics. Despite centuries of European influence, Samoa maintains its historical customs, social systems, and language, which is believed to be the oldest form of Polynesian speech still in existence. Only the Maori of New Zealand outnumber the Samoans among Polynesian groups (though virtually no full-blooded Maoi still exist).

Samoans have a communal way of life with little privacy: they do all their activities together and even traditional fales (houses) have no walls, and just use blinds made of coconut leaves during the night or bad weather. Up to 20 people may sleep on the ground in the same fale; during the day the fale is used for chatting and relaxing. Family is viewed as an integral part of life.

The climate is tropical with the average annual temperature of 26.5 degrees C, and a rainy season from November to April.

Scuba Diving Vanuatu - Santo
One island in Vanuatu more than any other attracts divers from all over the world - it is Espiritu Santo.
$AU 19.95
5% Cardholder's Discount!