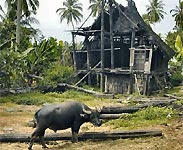 Sumatra is the sixth largest island of the world and is the largest part of Indonesia.

The people are of Malay stock composed of many different tribes, speaking 52 different languages. Most of these groups, however, share many similar traditions and the different tongues are closely related. Malay-speaking people dominate the eastern coast, while people in the southern and central interior speak languages related to Malay, such as Lampung and Minangkabau. The highland of northern Sumatra is inhabited by the Bataks, while the northernmost coast is dominated by Acehs. Ethnic Chinese minorities are also present in urban centers.

The backbone of the island is the Barisan mountains chain. The volcanic activity of this region endowed the region with fertile land and beautiful sceneries, for instance around the Lake Toba. It also contains deposits of coal and gold.

To the east, big rivers carry silt from the mountain, forming the vast lowland interspersed by swamps. Even if mostly unsuitable for farming, the area is currently of great economic importance for Indonesia. It produces oil "from above the soil and underneath", the palm oil and petroleum.

Most of Sumatra used to be covered by tropical rainforest, home to species such as orangutans, tapirs, and Sumatran tigers, and some unique plants like the Rafflesia. 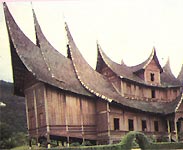 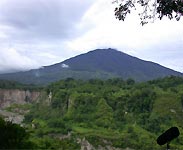 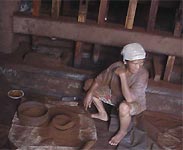 Sumatera has a tropical and a wet season with rainfall varying between 77 - 521 mm. The temperature of Sumatera tend to vary only between 26 and 27 degrees C

Some of the diving areas in Sumatra include Pulau Sikuai off the Padang coast in West Sumatra and Pulau Weh off Banda Aceh at the most northern tip of Sumatra.

The major entry point of North Sumatra is Medan, either via Jakarta, or from Singapore by air. Padang is the main entry point for West Sumatra.