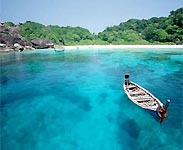 Thailand is a meeting place, where people of diverse backgrounds have come together to pool their culture and racial characteristics, giving rise to something new, strong and vital. With a territory and population about the same size as France, Thailand's people are mostly ethnic Thai, with other ethnic groups mixed in: Burmese, Chinese, Lao, Khmer and hilltribes. The people are mostly Buddhist, less than 10 percent believe in other faiths: Islam, Christianity, Hinduism and Brahmanism.

The country divides into four regions - North, Northeast, Central and South - sharing borders with Malaysia on the south, Burma on the west, Lao on northeast and east, and Kampucha on the east.

Thai is have their own language. The language spoken in the Central Plains of the Kingdom is the standard Thai taught in all schools, broadcast over radio and TV, and printed in publications. The language has derived many words from other languages, particularly Sanskrit and Pali from India which came to Thailand with Brahmanism and Buddhism. Words co-opted from the languages of neighbouring countries are in common use : Chinese , Khmer and Lao. Although Thai language is standard and used all over Thailand, however, each region has its own dialect. 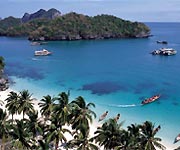 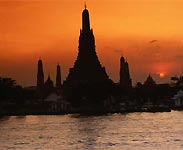 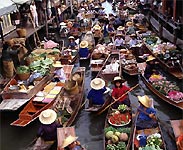 Thailand has three seasons: rainy from July to October, cool and dry from November to February, and hot from March to June . With picking seasons spanning all three seasons of the year, Thailand has more than three dozen kinds of attractive fruit that come in a collage of shapes, a spectrum of colours, and a melange of flavours. Flowers and plants blossom in profusion and display a myriad of colours to delight the eyes and refresh the spirit all year round.

The Andaman Sea offers some of the world's most spectacular coral reefs, ocean drop-offs, and submerged pinnacles. With numerous wreck dive sites and islands also available on the Gulf of Thailand side, diving is capable nearly year-round. The crystal clear waters enables you to view colorful sea fans and soft corals for up to 100 feet, while the murky waters, full of nutrients, attracts larger marine animals, with numerous sightings of the elusive whale shark. The tropical, warm currents means suiting up in bathing suits is quite adequate.

Flying is the most convenient mode of transportation for most visitors traveling to Thailand. Domestic flights are also easy and convenient, cutting down on journey time. Inter-city bus services offer a fast means of transport to all corners of the country. The State Railway of Thailand runs an efficient rail service linking Bangkok (Hua Lam Phong is the central train station) to the rest of the country at very reasonable prices for express, fast and ordinary trains.

Ocean Empires
Ocean Empires takes its viewers on a unique journey into the heart of the coral reef - the most extraordinary environment on the planet.
$AU 19.95
10% Cardholder's Discount!

Who is the most handsome?

Restoring a Fishery - With Dugongs

In an imaginative approach to fisheries renewal a Thai scientist is using the dugong as the centerpiece of his campaign to restore fishing livelihoods and coastal ecosystems. Julian Cribb reports.

Leopard Sharks Up Close and Personal

The leopard shark (Stegostoma fasciatum) belongs to the Order of carpet sharks (Orectolobiformes) and is easily recognisable.