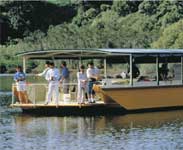 A wealth of Tweed & Coolangatta visitor information is available on the popular tweedcoolangatta.com.au web site.

The main attractions of the area are the abundance of pelagic fish attracted to the marine sanctuary of Cook Island, and the surrounding coral reefs situated at a variety of depths. Try diving mouth of Tweed River, an estuary with some pleasant surprises with many juvenile fish, loads of smaller rays and octopus everywhere. Nine Mile Reef off Tweed Heads on the Gold Coast is known as a "sharky" spot by the locals. Year-round residents include wobbegongs, blind sharks, bronze whalers with leopard sharks in summer; grey nurse sharks in winter; and occasional hammerheads and whale sharks. Reef fish are ever-present, and pelagic fish sometimes circle in large numbers. Turtles, stingrays, eagle-rays are regulars as well as the occasional manta-ray. The rocky reef here drops from 10-30 metres and is covered with numerous corals.

Only an hour and a halfs drive South of Brisbane. Closest airport: Coolangatta/Gold Coast. Gold Coast International Airport is the most convenient gateway to the Tweed. It is the seventh busiest airport in Australia, with around 2 million passengers each year.

My first opportunity to use the Seadoo Supercharged Seascooter was recently on a dive in the Tweed River, northern NSW. Visibility was quite good (15m) and water temperature was warm (24 degrees).