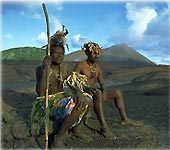 This amazing diversity is a result of 3,000 years of sporadic immigration from many Pacific countries. Although most settlers arrive from Melanesia, the larger built, lighter skinned Polynesians also settled in the islands. As with all nations and peoples, over millennia these different groups came into both peaceful and violent contact, sometimes intermarrying and sometimes having losing their cultural identity to a more dominant group.

Each successive wave of immigrants carried with them all the tools needed to live. Food crops, tree seedlings and their most important animal - the pig. This animal is probably the most significant aspect of life in Vanuatu, for it symbolises not simply a source of protein, it is the cornerstone of their ritual life, a token of wealth and power upon which entire societies are founded.

Despite the introduction of European ideas, the disastrous effects of missionaries and blackbirders and the development of Bislama as a universal language (loss of language being a prime destroyer of primitive cultures worldwide) Vanuatu's richness and diversity of culture is one of its primary attraction to visitors. Rituals, the obligations of kinship and traditional ceremonies is an integral part of modern life and one that can be appreciated more fully by a visit to one of Vanuatu's many islands. 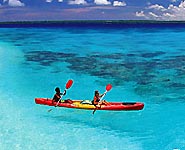 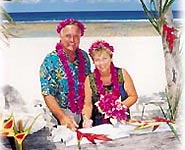 Or maybe even get married ... 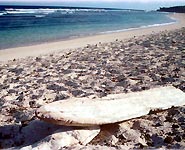 I had only just booked a trip to Vanuatu to dive the President Coolidge ... and I thought Thats it! I need that lens for the Vanuatu trip ......

Having press ganged my adoring fiancee into completing a scuba course, in the off chance that we would honeymoon at a diving location, I then had to put up with tears and fears as she battled her way through the fear of sharks, embellism, sea snakes, jelly fish, piranha ...