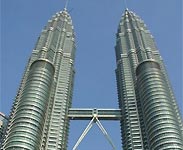 West Malaysia is the part of Malaysia which lies on the Malay Peninsula, and shares a land border with Thailand in the north. It is connected via a causeway and bridge to the island of Singapore to the south. Across the Strait of Malacca to the west lies the island of Sumatra.

The term Peninsular Malaysia is used more often than West Malaysia or Malaya (which is now becoming obsolescent due to its connotations of the British colonial era). Nonetheless, all three terms are correct, and the older term "Malaya" can still be found in many institutional titles, e.g. the High Court of Malaya, the University of Malaya, Malayan Railway, etc., as well as in legal contexts in the phrase The States of Malaya (Negeri-negeri Tanah Melayu). Note that until 1946, the term Malaya usually included Singapore.

The distinction between West and East Malaysia is significant beyond the sphere of geography, because as well as having a different court structure, the Eastern states have more autonomy than the original States of Malaya, controlling e.g. immigration from the peninsula. 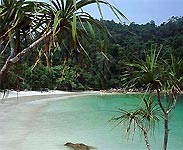 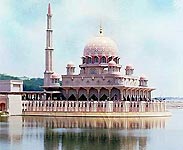 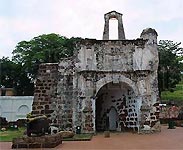 Malaysia's climate is hot and humid with relative humidity ranging from 80 - 90 percent, except in the highlands. The temperature averages 20-30¬?C throughout the year. Tropical climate is experienced year-round with the rainy season varying on the coasts of Peninsular Malaysia. The west coast has it's rainy season from September through December with the east coast experiencing it's from October through February.

Pulau Payar Marine Park at the south of Langkawi Island is reputed to support the most number of coral species in the country - The beautiful Perhentian Island is located about 20kms off the coast of Terengganu. It is easily accessible by boat from Kuala Besut, although the fastest way to the island is by speedboat, which takes about 30 minutes. The island is still ¬ënew¬í with white sandy beaches and many unexplored nooks and crannies waiting to be discovered. The friendly people of the surrounding fishing villages with their colourfully painted boats are an added attraction on this scenic island- Pulau Tinggi is surrounded by crystal-clear turquoise waters, a sheltered harbour and coral reefs abound with marine life. This cone-shaped island lies 32km south-east of Mersing on the east coast of Johor - Pulau Tioman is a haven for flora and fauna enthusiasts. Some fish found around this island are not found elsewhere. Its calm, shallow and warm waters make it an excellent spot for diving, even at nighttime.

Fly into Kuala Lumpur or enter overland from Thailand in the North or Singapore in the South.

Sealife flex-connect Flex Arm
Expand your underwater camera set with one 'click!' - The Flex Arm allows for creative lighting, easy aiming, and reduced backscatter by positioning the flash or light farther away from the camera
$AU 47.95
5% Cardholder's Discount!

Tioman Mega Dive - too much fun in the sun

I was part of a number of international press who were invited to attend this new anual dive event on Tioman Island - which for those who don't know is located in the South-East of mainland Malaysia. A 4 day festival which promised lots of activities, diving and other fun in the sun.

For the second time in two years I made my way to Kuala Lumpur and to the Malaysia International Dive Expo.