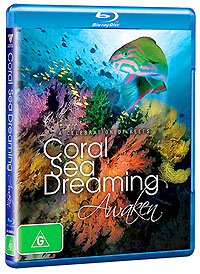 Finally the NEW Coral Sea Dreaming is out - fully filmed in High Definition. Get it right here for the best possible price.

Over 84 extraordinary minutes, Coral Sea Dreaming - Awaken enters into the very heart of life - and death - on a coral reef. It is a story that spans 500 million years and stars some of the most exotic and wondrous marine creatures on earth. Coral is the planets greatest natural architect, and coral reefs boast the highest biodiversity of any ecosystem.

Many of the sequences have never been filmed before. Some may never be filmed again. Corals have survived 5 mass extinctions. But can they survive us?

Filmed over 2000 dives on three great coral reef ecosystems; The Great Barrier Reef, Ningaloo Reef, and Papua New Guinea, Coral Sea Dreaming - Awaken is a celebration of reefs now under threat of climate change and ocean acidification. There is much to be done to safe-guard these precious ecosystems for future generations. And very little time to do it.

David Hannan is renowned not only for his filmmaking, but also the conservation that is activated by his films. This is the driving force behind his work.

Coral Sea Dreaming - Awaken is a mesmerizing and poignant celebration of one of the planet's great natural wonders.

This is no ordinary DVD or BluRay disc, it's a fully featured package of options - with many different ways of exploring David's world of coral reefs.

Viewers can select to have a music-only experience, and enjoy the film as an exceptional relaxation video.

Additionally, pop-up text with creature identification or interesting facts about ocean issues can be activated, turning the program into a powerful educational resource.

For a more classic documentary experience, 'switch on' an informative narration track, or peek 'behind the scenes' with David Hannan or Tania Rose.

Alternatively, selected scenes or even the whole program can be played to loop on 'repeat' turning the screen into a fascinating marine aquarium.

DVD in PAL or NTSC (USA+Japan) formats as well as Blu Ray discs available (choose from dropdown below) - 85 minutes + extras.