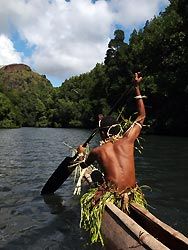 It is one of the few places left in the world where a diver can see macro critters, pelagics, and big stuff, as well as fantastic soft and hard corals. The often misused and abused adjective “pristine” is actually appropriate here, due to low fishing pressure in the area in comparison to other areas of the Coral Triangle, no dynamite fishing, and thanks to a system implemented by dive resorts whereby local reef "owners" receiving a small fee for every diver that visits "their" reef. As a result elders make sure that the reefs are not fished.

So, where to go? We set of on a four-resort tour to the north and the south taking in the provinces of Tufi, New Ireland and Milne Bay. Read below for the first of three parts on our journey. Part II covers New Ireland, and Part III Milne Bay and the Annual Goroka Cultural Festival.

Sitting at the back of the De Havilland Twin Otter with my partner Imi and an American Mom, Dad, and teenage son combo in front, I peered through the misty clouds at the swath of trees below, occasionally cut by the hairline crack of a path or the meandering swirls of a river. The jagged peaks of the Owen-Stanley range that run down the spine of the island weren’t that far away as we headed east from Port Moresby to Tufi, Oro. The landscape was rugged to say the least, and it was easy to understand why both Australian and Japanese troops had struggled during the Second World War battles there. 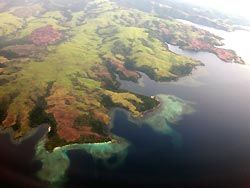 As we approached the east coast of Oro province the spectacular fjords of Cape Nelson came into view, a strange mix of glacial action now topped by lush tropical forest, with aqua coral reefs surrounding the headlands clearly visible in the cobalt blue of the Solomon Sea. Banking steeply, we lined up with the gravel airstrip and touched down. Two 4WD vehicles were waiting for us to take us on the one-minute drive to the resort.

With a fruit juice in hand, we whizzed through the usual paperwork and were asked to leave our dive gear outside our rooms in 20 minutes and meet in reception from where we were taken down to the dive centre. Less than 90 minutes after landing the five of us, plus instructor Glen and DM Alex, were in a boat and heading off across the flat sea to Bev’s Reef, part of the mid-distance reef system, and one of the several Tufi reefs with a manta cleaning station. Using a well-drawn dive site map, Glen laid out the plan for a drift dive, and off we went. 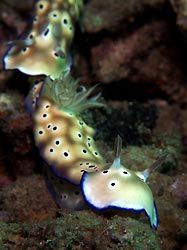 Imi hadn’t dived for four months and I had the new camera so we were planning on just chilling and getting comfortable again, and a wall dive seemed ideal. Rolling in we both burst into grins. Not just from the simple pleasure of being in the water again, but because of the clear blue water filled with corals, reef fish, and colourful purple, yellow, and white sea squirts. There were nudis and schools of fusiliers and snappers, whitetip reef sharks and three of the nine species of anemonefish found in PNG.

Wending our way slowly at the back of the group, coming over the top of a coral outcrop to have gander for big stuff that might be hanging out in the current I had to do a double take. Sitting there next to a crinoid was one of PNG’s underwater grails, a black Merlet’s (or Lacy) Scorpionfish, Rhinopias aphanes, that has the peculiar habit off shedding its skin every three months or so. Photographers search for these for days and days, and here I was pointing an unfamiliar camera at one after barely 30 minutes in the water. It turned out to be the first of two that saw, but it was the start of a long list of new sightings for me.

One of Tufi’s signature sites is Veale’s Reef, often dived on the same trip as Bev’s. Veale’s is often frequented by an albino hammerhead, but not on this occasion. Still, it was hard to grumble with of schools of baitfish, barracuda, Black and white Snapper, batfish, some Spanish Mackerel, as well as a swift-moving Green Turtle and a couple more whitetips around. We certainly had enough to talk about over a late but delicious lunch on the veranda. 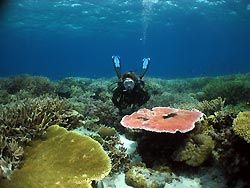 The outer reefs are a 30-minute boat ride away and Cyclone Reef is one of them. The story goes that it appeared from nowhere after a severe storm in 1972, brought up from the depths by the elements. It’s very top breaks the surface of the sea and is a haven for mating seabirds. Over the edge it drops away into a wall dive, once again buzzing with reef life, and out in the blue we spied two hammerheads cruising past. Minor Reef is nearby and often dived in tandem with Cyclone. The reef top sits a few metres below the surface and its plate and staghorn corals bask in the sunlight illuminating the damselfish that adorn them, making it a great spot for no-flash photography. It is named after the large bright yellow and black Notodoris minor nudibranch that is often found there. 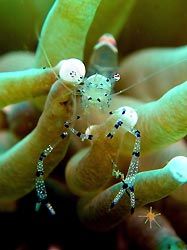 Back at the resort, looking at the maps on the walnut-panelled walls gives one a better sense of the remoteness and the size of the area. Whole swathes of the Solomon Sea, starting where Cyclone and Minor Reefs are, are marked as uncharted. There are basically reefs everywhere out there. Jack Daniels and Nuggets are two recently discovered ones, and Glen and his brother Archie were keen to get us out to them. Armed with a small plastic bottle with a little water in it, Archie began crunching and rolling it between his hands as soon as we were down JD’s slope and onto the wall. Within a couple of minutes he had attracted the attention of four Grey Reefsharks. They didn’t seem very used to human interaction and kept their distance, as did a couple of turtles, the sharks occasionally darting a bit closer to recce these odd, large bubble-blowing creatures, and a couple of whitetip reef sharks came by for a look too.

With our appetites for diving well and truly whetted, we went for an afternoon dive off the public wharf. It is talked up as a photographer’s delight and one of the best spots in the world for so-called muck-diving. Muck-diving gets its name from apparently uninteresting sites that can be either silty, sandy, muddy, or just rather barren-looking, but that are actually home to a large number of small, weird, and wonderful creatures.

Tufi’s wharf dive site is more of a junk dive than a muck dive, the sloping wall of the fjord being littered with debris from the harbour’s previous life as a torpedo patrol boat base during WW2, and the dumping of old bits of machinery, the odd fuel drum, and some girders that were no doubt formerly part of the jetty. There are also the remains of

PT boat and its torpedoes down at 45 metres, but there was more than enough along the fjord slope and wall to keep us occupied with Ornate and Robust Ghostpipefish, Frogfish, Ringed Pipefish, Common Seahorse, loads of nudis, Crabeye Gobies, Anemonefish, Mantis Shrimp, Ceaner Shrimp, Lionfish, and 50 metres past the remains of the torpedo boat wharf, walls, little caves, and tons of sponges on the corner of the harbour. If you fancy a fourth dive in a day, dusk dives are available, and Alex and Archie the eagle-eyed guides are experts at finding nocturnal action right by the wharf, including brightly-patterned Mandarinfish.

If three or four dives a day is a bit too much, there is plenty to do to fill your time actively. On the Sunday we were paddled up McLaren Sound in an outrigger and advanced into the forest until it became too shallow to make further progress. After a short walk we were given an insight into village life, traditions, the uses of various plants and trees, and demonstrations of tattooing and sago-making before being paddled back to the dive boat that whisked us to a white sand beach on the headland opposite the resort for a barbecue lunch and afternoon swim. 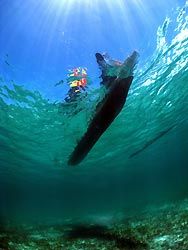 In the afternoon you can also walk through the village or amble down to the dock, and watch the locals from the surrounding area come in on their outriggers for a trip to the store by the wharf or to trade in the village. There is a steady trickle of comings and goings if people watching is your thing, but the main event is the Saturday evening wharf market that springs up when the weekly ferry comes in from Popandetta. That said, I would have gladly dived the sites we did over and over again; every dive was “Wow dive”.

On our final afternoon we took a two-seater canoe and paddled up the fjord, hearing the sounds of the forest as we went. We canoed the deep blue in the centre of the fjord, apparently bottoming out around 200 metres below, and would pop over to the shallow reef tops for a dip and a snorkel. At many of the small beaches we’d see an outrigger parked up and hear voices in the distance, mainly children whooping with laughter, frolicking unseen in the trees. It is certainly a place that should inspire happiness. 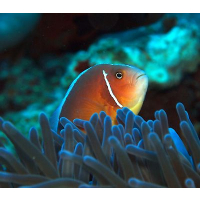