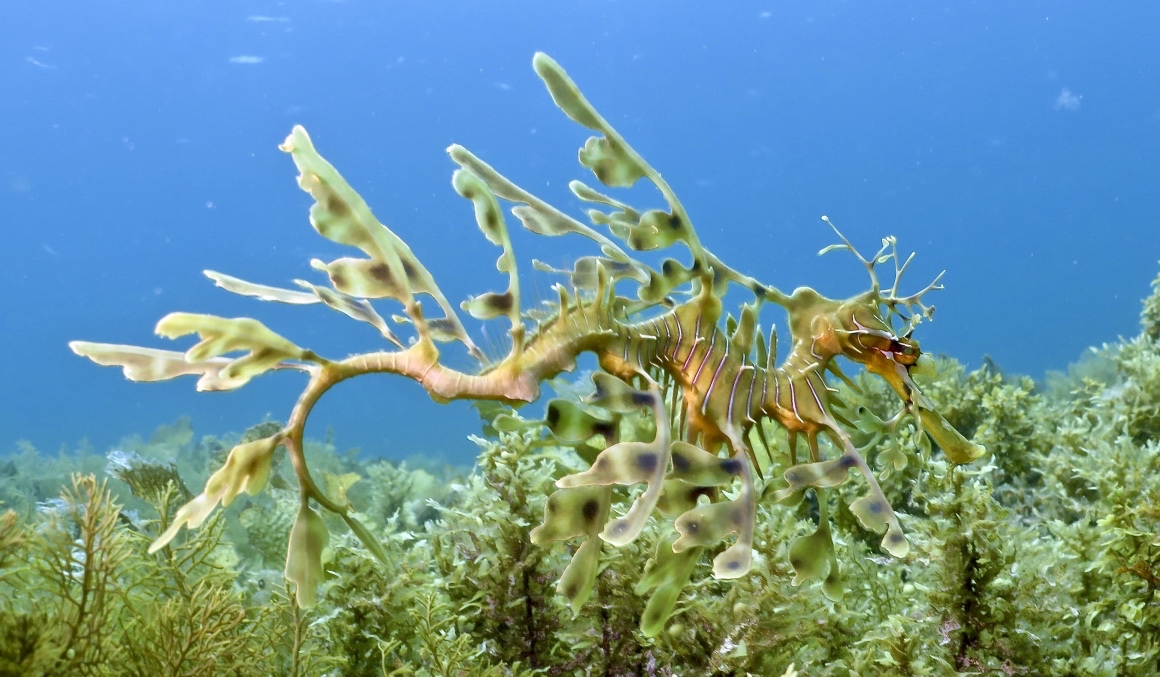 The Leafy Sea Dragon is one of the most ornate and camouflaged marine creatures in our oceans, amongst many other's - hence making it a highly sought-after photography subject and sight to witness. Their body mimics the seaweed/kelp in which they call home with leaf shaped appendages protruding from their body, which provides them with amazing concealment skills in the weed and kelp growths they live amongst.

This impressive natural disguise makes spotting a Leafie to the untrained a very very frustrating exercise, and it takes a lot of concentration and patience. In leading and guiding many first-time divers and International guests I find they still struggle to see the leafie even when I am clearly pointing directly at the subject. You can actually see the amazement in their reaction and facial expression when their vision focuses. It is a difficult task to spot and identify the leafie as they move through the water by swaying their fins from side to side with perfect assimilation amongst the weed. 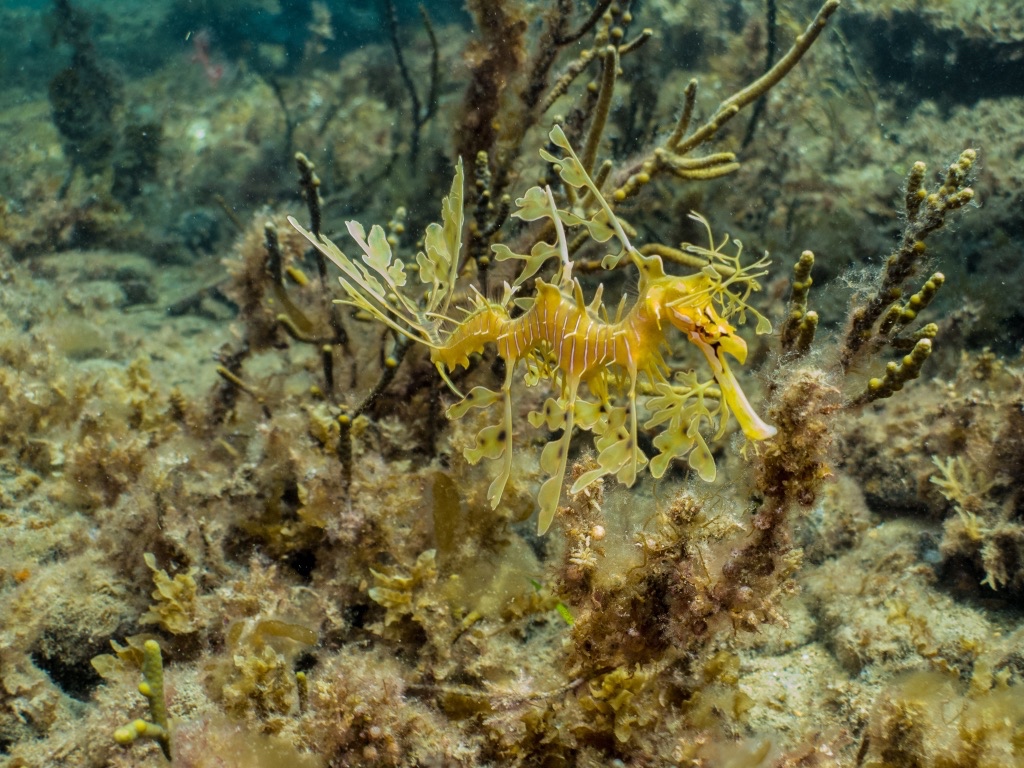 The Leafy Sea Dragon (Leafies) is a close relation to seahorses and pipefish and is specifically endemic to Australian temperate waters. As a proud South Australian, we proudly make claim that the Leafie is mainly found in the waters along the southern coastline of South Australia. There are numerous locations throughout Sth Aust where the leafies can be witnessed from the Fleurieu Peninsular to the Yorke Peninsular with the local and timely knowledge of dive shops and experienced individuals.

Although it can be found in waters from Kangaroo Island to south-western Western Australia and even along the eastern coast the best chance is to visit Sth Aust. We do also have a random sighting of the Leafies close cousin (the Weedy Sea Dragon), however FYI the Weedy Sea Dragon is more prominent on the East Coast of Australia. 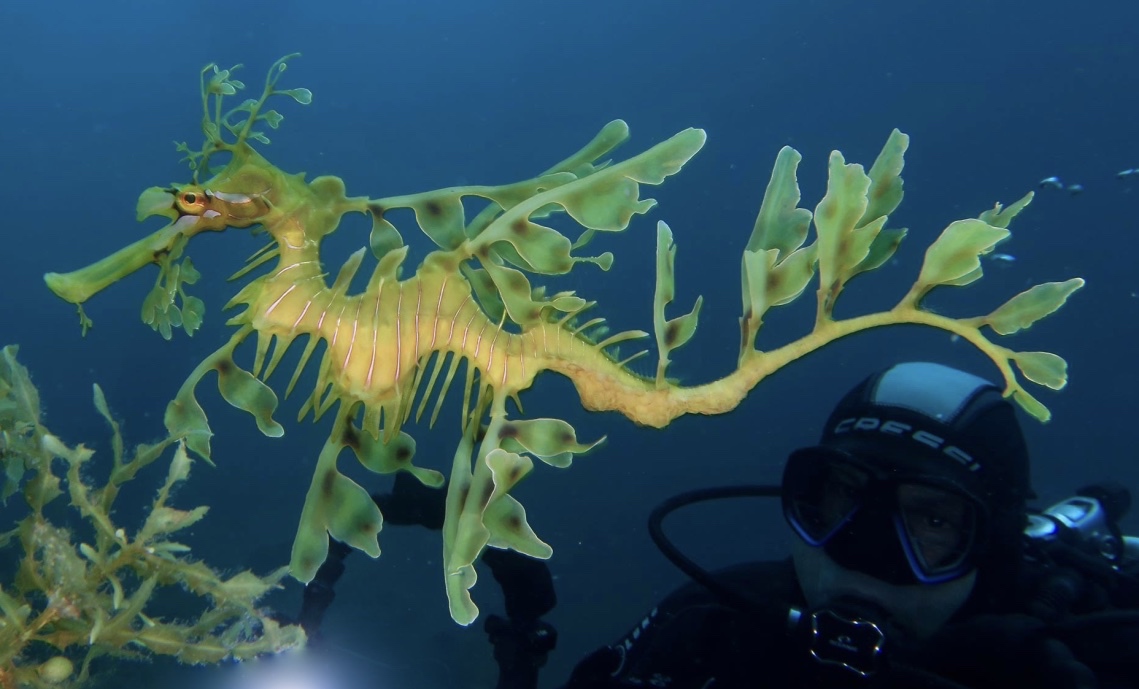 Leafies are commonly seen in depths around 3 to 10 mt's in and around the weedy covered small rocks, reefs and sandy patches close to shore, and are generally brown to yellow in colour with olive toned appendages.

They are also generally territorial to a particular area, staying within a 20-30 metres radius, however if they are harassed and feel threatened they do move away to close-by seaweed beds and seagrass meadows. Populations may also fluctuate seasonally in response to food availability and spawning season.

Their appendages also have darker centres fading to the edges, not too dissimilar to the surrounding kelp, hence providing the perfect camouflage as shown in the 2 photo's below. 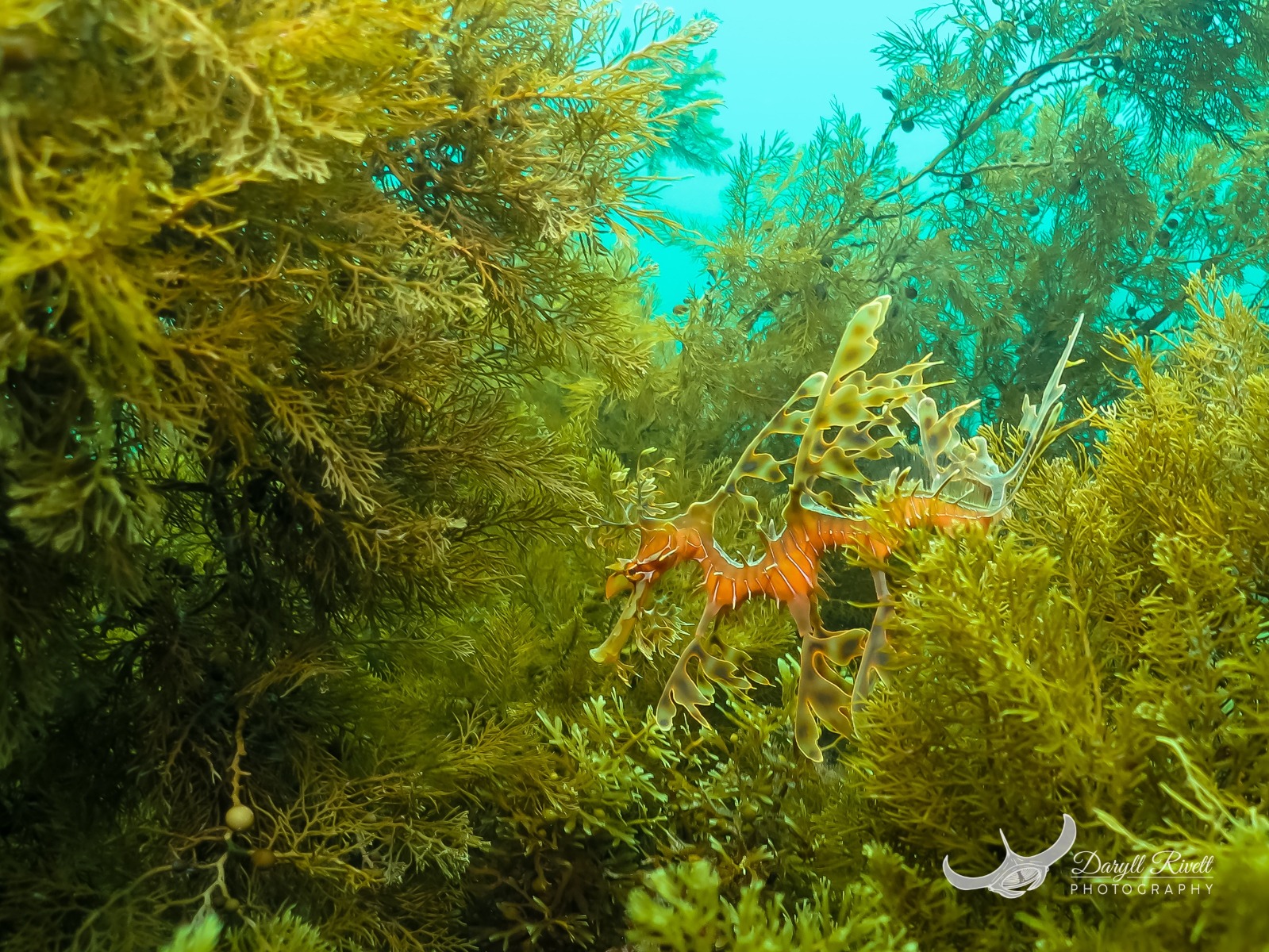 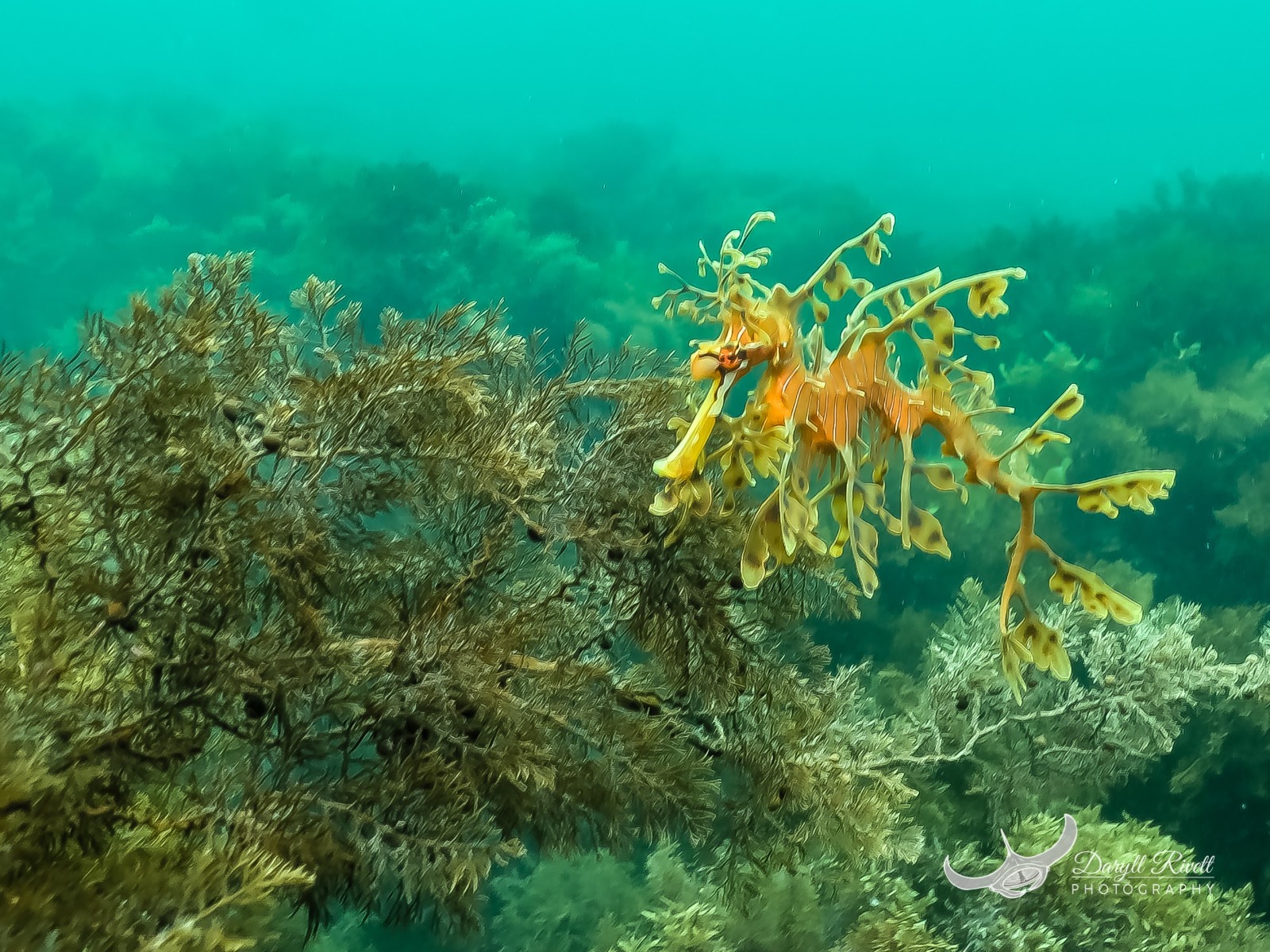 Where to see Leafies in South Australia

South Australia is very lucky to have many locations you can dive with, photograph and witness where Leafies reside.  However, in recent times the most popularly visited site 'Rapid Bay' on the Fleurieu Peninsula has had a drought in sightings and numbers, which have been put down to a few reasons - such as illegal poaching and over diving causing stress to the Leafies.

The old jetty which is in a state of constant decay can be reached by a strong surface swim, or short dive from the adjacent new jetty, and is still very much worth the effort. There you will be rewarded with large schools of fish (Old Wives & Yellow tail Scad), nudibranchs, sea stars and visiting rays and the occasional seal. The old jetty is particularly impressive at the 'T' junction (The Aquarium) where the abundance of marine life is breathtaking.

So, the locations in Sth Australia where the leafies can be witnessed and dived with is kept a tight-lipped secret between local divers and dive shops to ensure their survival and habitat is preserved for future mating seasons and divers to enjoy them for years to come. 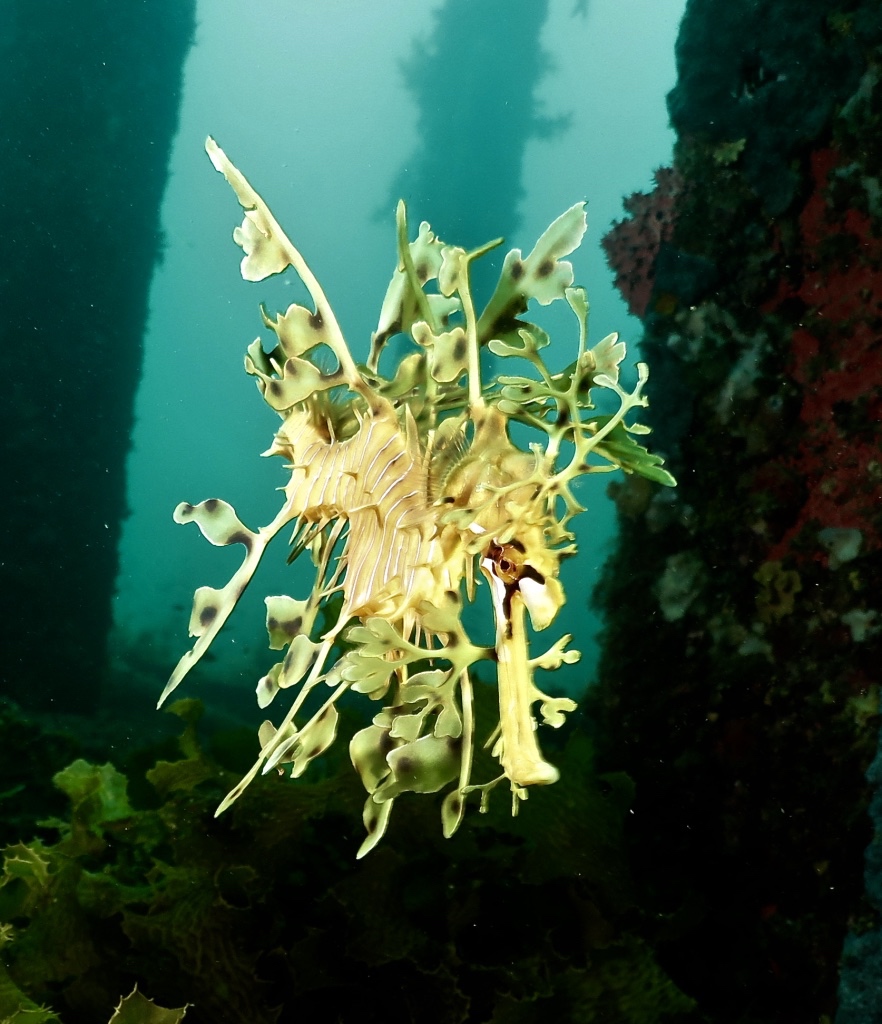 Leafies are elegant and effortless in the water, and give an impression that they're not in control of their movement as they sway and frolic in the currents. However, one would assume their appendages are used for swimming, no, they are merely for camouflage. The leafy has two almost transparent fins, a pectoral and dorsal to allow them to move, change direction and swim, which can be seen upon closer inspection.

Another important factor for the photography diver is that leafies are intelligent or shy, as they nearly always turn their back to the camera making if very difficult to get that perfect facial shot without harassing them. FYI, be patient and allow the Leafie to settle and welcome you and you will be rewarded with that 'killer shot'.

Supported by the Scuba Divers Federation of South Australia, the Government of South Australia has put together a Code of Conduct when diving or snorkelling wth Leafy Seadragons. Adhereing to this will protect this unique creature and give you better opportunitie to enjoy and photpograph this animal in the wild.

Leafy Sea Dragons are of the Sea Horse family and the males are responsible for childbearing, but instead having the eggs deposited inside a pouch. The leafies have a spongy brood patch on the underside of the tail (abdomen) where females deposit their bright-pink eggs during mating, as seen below. The eggs are then fertilised during the transfer between the sexes, and the male incubates the eggs and carry them to term, releasing miniature sea dragons into the water after about four to six weeks. 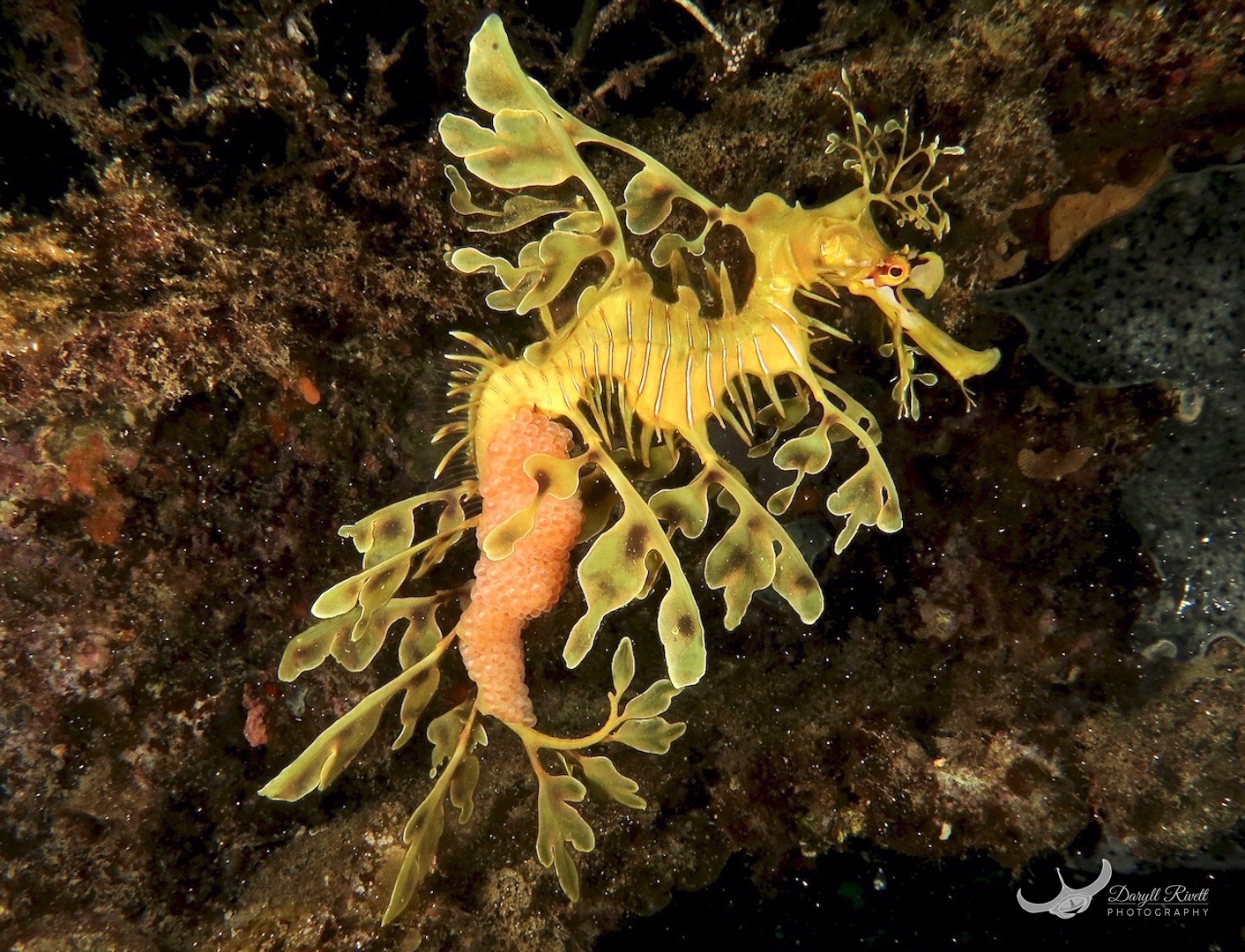 A perfect example of a 'pregnant' male with freshly fertilised and deposited eggs on the lower part of the males abdomen.

Leafies source of food are tiny crustaceans such as Mysids or sea lice and it is not known whether the leafy has a predatory threat, but assumed there are none. However, they are susceptible to become victims to illegal poaching which is very dangerous as they have a very weak swim bladder.

So, if the leafy is ascended too quickly to the surface, it 'will' die, and in fact it would take several hours to safely remove one from the depths of the ocean floor. Even if successful, it is highly probable many die from malnutrition, not being fed appropriately.

Another threat, and sadly the most popular is 'Human' interaction, sadly scuba divers and photographers put the Leafy into a stressful state. This stress can cause the leafy to ascend quickly (bursting swim bladder) and to leave the safety of their sanctuary and this I believe is what has happened at Rapid Bay, in conjunction with poaching.

For a real treat if possible try to visit during the mating season, which begins in Spring and runs from October through to December. While you’ll need to keep your distance to avoid interrupting the Leafies, this is also a good chance to spot the usually solitary creatures as they pair up, and most importantly the male with a brood of eggs.

In closing, as a resident of Adelaide with approx 600 dives and Dive Master Cert I am always happy to provide advice, information and act as a guide to see these wonderful creatures.

Another 'Rivetting Moment', to inspire & ignite the traveller in you, to broaden life challenges & experiences!!!!! 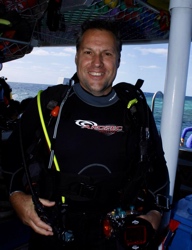 My name is Daryll Rivett from Adelaide-St Aust, and commenced scuba diving late in life and have been trying to recapture those lost years ever since.  I became obsessed with underwater photography and have completed many courses, joined groups and upgraded my camera setup several times.  I have won a few accolades in photography with Scubaverse magazine, Honorable Mention (APA), Exhibitor and had images purchased.

I am a certified Dive Master with 600 dives, an avid underwater photographer and travel blogger focusing my energy and diving over the past 3-5 years towards photography workshop trips.  I enjoy both macro and pelagic marine creatures as subjects along with the brilliance of soft corals and majestic walls.

You can follow me on Instagram (@mdr_scuba) or subscribe to my website www.rivettingmoments.com.au to view photos, collages, videos and Blog’s of my diving, photography, videography and travel moments.  Social media allows me to update my friends and followers on recent activities, but also to promote awareness and appreciation of marine life and at times marine conservation.

All of these experiences, learnings and skills have been driven by passion to improve my skillset’s, but most importantly from the kindness of mentor’s, friends and divers alike, I wish to give back and share with other divers.