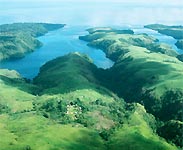 Lying just south of the equator, 160km north of Australia, Papua New Guinea is part of a great arc of mountains stretching from Asia, through Indonesia and into the South Pacific. This fascinating land boasts more than 600 islands and more than 800 indigenous languages (tok ples), and is home to the largest area of intact rainforest outside of the Amazon. Papua New Guinea consists of 4 regions made up of 19 provinces and the National Capital District, each with their own special character and cultures. Visitors will discover a wealth of tropical scenery, from the jungle-clad mountains of the highlands to the sandy white beaches and atolls of the coastal and island provinces.

Vast tracts of the country are wild and undeveloped, with magnificent scenery that ranges from pristine coral atolls to volcanic mountains, dense tropical rainforest and large rivers. The mainland is divided by the Owen Stanley Range, a massive central spike with peaks towering over 4000m. Great rivers begin their journey to the sea from these mountains, among them the mighty Sepik River, one of the world's longest waterways. Beneath the mountain chain, fertile coastal plains, flooded delta regions and mangrove swamps exist alongside broad sandy beaches and sheltered bays. The rugged mountain terrain and deep cave systems offer wonderful adventure opportunities for walkers, cavers and climbers, and there is canoeing, kayaking and fishing on the river and delta system. Papua New Guinea also enjoys some of the world's best diving around its warm coastal waters, with striking coral reefs around the mainland coast and the islands of the Bismarck Sea and the Milne Bay area. 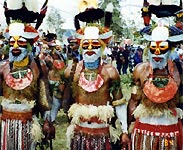 Cultural show in the highlands of PNG 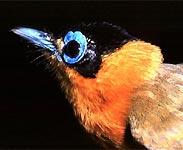 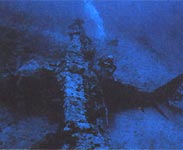 Warm to hot and humid throughout the year. There is a rainy season, which varies from province to province, however, in general, it's driest from May to December. The air is clean; watch out for sunburn, particularly in the Highlands, even on overcast days.

Papua New Guinea is one of the best dive heavens of the world. It is home to some of the world's spectacular diving dubbed as the 'underwater photographer's paradise' with many international award -winning photos being taken in PNG waters. Divers enjoy a huge diversity of dive sites including barrier reefs, coral walls (drop off), and coral gardens, patch reefs, fringing reefs, sea grass beds, coral atolls, and wreck dive sites. The wreck sites provide a collection of ships, aircraft and submarine wrecks from World War 2. The average water temperature varies from 25 degrees Celsius along the edge of the Coral Sea to 29 degrees Celsius in the Bismarck Sea. One can dive in Papua New Guinea all year round, with the high season generally from May to November.

Air Niugini and Qantas offer services to PNG, while Air Niugini runs domestic flights to the provinces. There are other smaller airlines serving the more remote parts of the country.

How in god's name could "HE" have created such wonderful place and then kept it hidden away from all us mortals for so long? The crystal clear water, schools of big fish and warm tropical days all concealed from the world simply by a 12-hr flight back in time.