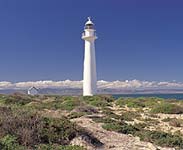 In 1801 Matthew Flinders was commissioned by the British Admiralty to chart the unknown coastline of Australia. In February 1802 he dropped anchor in Boston Bay and named the site of Port Lincoln after his native Lincolnshire, England. He also named the bay and its large island after the town of Boston in Lincolnshire.

Port Lincoln was first settled in 1839 having been one of several contenders for the site of the capital of South Australia, all of which were investigated and rejected in favour of the present site of Adelaide by Colonel William Light in 1836.

The early development of the township centred on agriculture, with wheat, wool and sheep farming the main activities. An early industry in the area was whaling, which flourished briefly in the mid 1800's.

Located at its southern tip, Port Lincoln is the Eyre Peninsula?s second largest city. Known as the ?Tunarama City?, the city of Port Lincoln is set on the shores of sparkling Boston Bay, Australia?s largest natural harbour. A magnificent marina development, Lincoln Cove is home to the tuna fishing fleets of the Great Australian Bight. 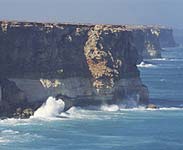 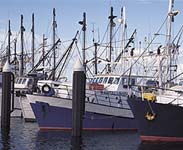 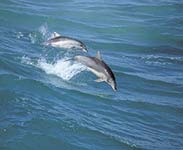 Of course this area is well known for the appearance of the magnificent Great White Shark, King of the Sea, Predator Extraordinaire. Thrill seekers will have their appetite for adrenaline satisfied whether this awesome predator is observed swimming above or below the water. This experience is not for the fainthearted or for the impatient. However, you are still able in other places to safely dive amongst encrusted pylons, rocky reefs and sponge gardens, which harbour ascidians, tubeworms, bryozoans, soft corals, spider crabs and nudibranchs. Peer under ledges and find different species of shrimp, sea stars, and cat sharks. The waters and the reefs around the islands provide food and shelter for octopi, cuttlefish, squid, seahorses, pipefish and the Leafy Seadragons. The occasional seal might join you, depending where you go. Descend to the wrecks found around Yorke Peninsula and meet the locals: Blue Gropers, Blue Devilfish, Old wives, Drummer and plenty of Bullseyes.

World Atlas of Coral Reefs
This text provides a detailed and definitive account of the current state of our planet's coral reefs. With maps, descriptive texts and images by experts, this full-colour atlas should be a valid resource for anyone interested in these vital environments.
$AU 98.95
5% Cardholder's Discount!

This was my first time diving with Calypso Star Charters and Captain Rolf who had come highly recommended.

The voyage from Port Lincoln to North Neptune Island will take approximately 5 hours as we make our way in very mild conditions with slight seas and wind speeds no greater than 15 knots......