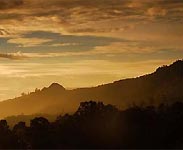 West Papua is a province of Indonesia on the western end of Papua island. It covers the Birds Head (or Doberai) Peninsula and surrounding islands. The province has a population of approximately 800,000, making it one of the least populous of all Indonesian provinces. The capital of West Papua is in Manokwari.

The larger part of West Guinea is the province of Papua, a land of contrasts, with some of the most impenetrable jungles in the world and snowcapped mountain peaks towering over glacial lakes. Papua is Indonesias largest and eastern most province and covers the western half of the worlds second largest island. It is a land of exceptional natural grandeur; with beautiful scenic beaches, immense stretches of marshlands, cool grassy meadows and powerful rivers carving gorges through dense primeval forests. The most heavily populated and cultivated parts of the island are the Paniai Lakes district and the Baliem Valley to the east.

The people of the island can be divided into more than 250 sub-groups, including the Marindanim, Yahray, Asmat, Mandobo, Dani and Afyat. Those in the central highlands still maintain their customs and traditions, virtually untouched by outside influences.

According to the scientists who is found 52 new species in Indonesia recently, that the Bird's Head peninsula at the western end of New Guinea Island is the epicentre of marine biodiversity. There are 1,223 species of fish and 600 types of corals. Covering about 18,000 sq km (6,950 miles), it has a greater concentration of species than Australia's Great Barrier Reef. 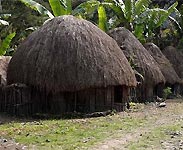 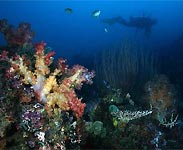 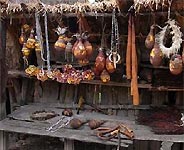 Raja Ampat is the most bio-diverse location in the world more than 3000 species of fishes and over 300 species of corals have been identified here, in a single one and half hour dive you can identified more than 282 fish species and more than 400 species. Till this very day the area is virtually unexplored and unknown due to its size. This area as there are still many remnants of WW II.

Possible rough seas and decreased visibility in the Raja Ampat area are from mid-June until the end of August. During the rest of the year, the sea is mostly very smooth whith good visibility.

It is easiest to fly through to Sorong via Jakarta or via Singapore. Merpati, Pelita and Lion/Wings Airlines operate daily flights from Jakarta to Sorong (with stopovers in Ujung Pandang/Makassar and/or Manado), whereas Silk Air operates regularly from Singapore to Manado. Daily flights to and from Sorong by Airlines Merpati, Lion/Wings or Pelita.

Great Barrier Reef A World Heritage National Park
This lavish and unique portrait of The Great Barrier Reef represents a bold new direction for Steve Parish Publishing as we embrace the expertise and creative talent of new authors and photographers.
$AU

In 2004, a group of Europeans set up a resort in the middle of nowhere about four hours by speedboat from Sorong, West Papua. Batbitem, an island near the Fiabacet-Boo chain in the southeast Misool area of Raja Ampat was to be the new 'Eden'.

It is with great pride that we announce the first official sanctions in our No Take Zone. Last week our Rangers encountered two fishing boats laying gill nets about 30 minutes north of the resort. The illegal fishermen were intercepted on a routine patrol of our 1220 sq km No-Take Zone.