Most divers in Australia will know that the Grey Nurse Shark population is under threat of extinction within our life time.

The Grey Nurse Shark (Carcharias taurus) have longish fork-like teeth that can easily been seen even when their mouth is closed, making them look much more scary than they really are. These teeth are being used to catch their prey such as fish and small sharks and rays. 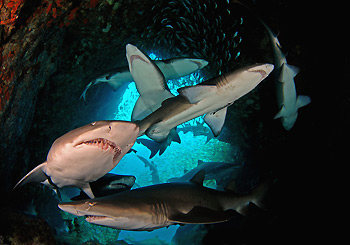 Grey Nurse Sharks have a bronze coloured back, a pale belly and a pointy snout with their teeth protruding. Some have darker spots on their sides, which can be used to identify individuals. They are a long lived, late maturing species with a very low reproductive rate who give birth to a maximum of 2 pups every second year. 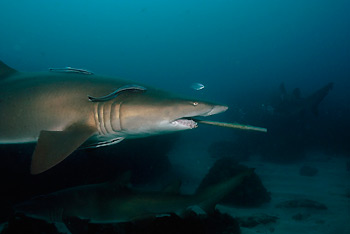 rey nurse sharks are susceptible to accidental hooking at aggregation sites and while moving between sites. Accidental hooking can result in direct mortality from injuries and infection, and can also cause non-fatal injuries that may impair feeding and reproductive ability.

To read a story on the amazing and fortunate rescue of a Grey Nurse Shark impaled on a fisherman's gaff, click on this link.

Both fishing and diving industries contribute significantly to the economies of many coastal communities, raising concerns about economic impacts associated with any changes tom management arrangements.

Anybody with a half-scientific mind will realise by looking at the last decade of data on grey nurse sharks that we cannot just sit around and do nothing. This species needs our help and not just for its own sake. Diving with sharks is a huge industry and especially grey nurse sharks are a fantastic species to encounter underwater. Their graceful moves and fierce looks make them a highlight on any dive. 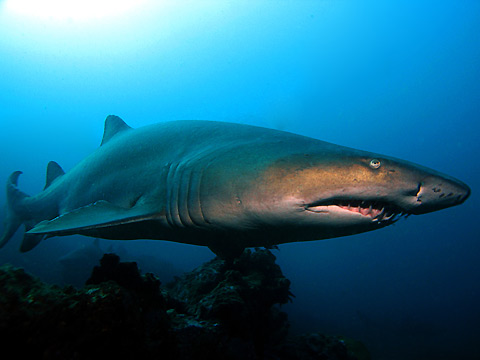 Millions of dollars are spent annually on diving with grey nurse sharks and it is time recreational fishers took a long hard look at the facts. It is not about 'locking out fishermen' from their traditional hunting grounds, it is all about common sense and the fact that we can longer just do what we like to this planet. We have to reevaluate many of the things we have been doing on this planet and look closely at the resources we have been taken for granted for far too long. It is not just the extremist views of some left-wing sandal-wearing greenies that demand better management of our natural resources, it is plain common sense.

Considerable effort has gone into determining the size of the grey nurse shark population over the last decade. Total population size has been the subject of much debate, with a range of views held in the community about its size and whether it is declining, static or recovering.

All of the population estimates to date are lower than the minimum optimal population size of 5000 required for long term persistence, and modelling suggests that the population is likely to be declining under current levels of known fishing mortality.

Most research records externally visible fishing hooks. Actual rates of hooking are likely to be higher. Necropsies have shown that many grey nurse sharks have been hooked internally despite having no externally visible hooks. In many cases fishers may not know they have accidentally hooked a grey nurse shark if it breaks the fishing line before being seen. Grey nurse sharks often survive accidental hooking, however even large adult sharks can die or suffer debilitating injuries from small hooks depending on hooking location.

The research indicates that bait fishing in proximity to grey nurse sharks presents a high risk of accidental hooking at all times of the day and night.

Download the current Public Consultation Discussion Paper in full (some points from this paper have been included in the article above) and create your own opinion. This paper contains much valuable and well researched information and is properly backed by scientific studies of the last decade.

You are invited to make a submission on the issues raised in this discussion paper and options to respond to them. In particular, your views are invited on future management arrangements for the protection and recovery of grey nurse sharks. You are also encouraged to provide your views on the social and economic costs associated with different management options.

A submission form can be downloaded from: www.dpi.nsw.gov.au/fisheries

Written submissions should be marked Grey Nurse Shark Submissions and posted to: