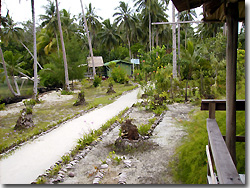 The Solomon Islands is made up of a group of more than 990 islands that covers in total over 1.35 million square kilometres. Now that's a lot of islands! Vision Divers chose just one of those islands as their diving and resting haven for ten days in October 2007. Uepi Island - an idyllic "postcard picture" island that offered us a secluded tropical paradise, awesome diving, and much appreciated break from the rat race of our city life back home.

As we crossed the "Welcome Jetty" on our arrival to Uepi Island, we were in awe of the countless numbers of fish life (reef sharks included) hanging about right there on show for us. To have someone tell you that you can watch the reef sharks as you are eating breakfast on the deck of the restaurant area, or whilst lazing in the hammock on the deck of our private bungalow, just doesn't prepare you for the extraordinary sights you see when doing exactly that!

To watch the sharks swimming by in the morning, and the endless parade of colour and activity as the prolific fish life go about their business, was an amazing start to our day every morning. All this on the surface! Seeing these each morning just made us even more eager to hit the water as we pondered what was in store for us when we ventured below the surface. And we were not disappointed. 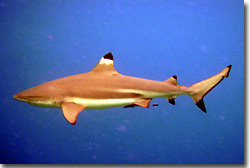 It's amazing to think that literally a few metres from the shore the ocean floor depth plummeted to 2 kilometres depth in many places. Needless to say this also afforded us some very pleasant swim-throughs and underwater caves as well.

From day one we were treated to sights and marine life that took our breath away, and had us surfacing with lots of excitement and plenty to talk about. The snorkeling was equally as awesome.

The marine life we saw is just too countless to mention in one article, but to name a few that you don't always have the privilege of enjoying while diving let's start with turtles, schools of great barracuda, humpy headed wrasse of unbelievable size and numbers. Black Tip and Grey Reef Sharks just about everywhere we went. 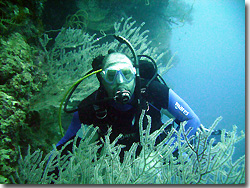 Giant clams and Christmas worms of various bright colours, massive fans, sponges, various corals and marine plant life all did their part to offer us an amazing display of colour during all of our dives.

And as a first for some, we were even treated to a couple of pygmy seahorses - wow these creatures really are tiny. It's quite fascinating to watch the dive guide looking for the pygmy sea horse. Because they are so tiny, the guide takes a magnifying glass with him, and ever so gently brushes his hand over a particular type of fan just enough so that he might see the seahorse sway with the movement in order to find one to show us. Unfortunately, we did not get a photo of these tiny critters to share with you. 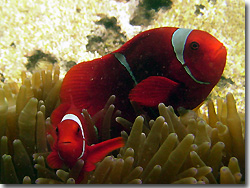 We must not forget our ever-entertaining friends - the anemone fish! These feisty little creatures are very hard to photograph, unless of course you catch them asleep at night, but then they are tucked away in the safety of their host anemone, so that is not particularly easy either. Oh well, all in a day's fun. And they are a lot of fun to watch.

On our third day of diving we were treated to a day trip in which we headed out to the Seghi Island area. The first dive on the menu was Taiyo Fishing Boat Wreck that is sitting vertically in the water. The stern lies at around 40 metres, and the bow at maybe 2-3 metres. When we arrived at the sight, our guide for the day, Pita, told us to look over the side of our boat, which we did, and from the surface we could see the bow of the boat near the top of the water, all the way down to the bottom - 40 metres below us. Oh yeah - we were excited! 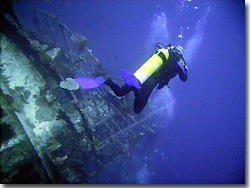 This was a great wreck to explore with plenty of growth and life on it. We could have spent hours down there if we could. The boat rests between two pieces of reef, at a 90° angle.
Next stop was Penguin Reef. This was a nice "cruisy" wall dive to use up the rest of our air from the previous dive and we sat around 15m where we were still treated to what we had come to expect (in just a couple of days) of prolific marine life.

After Penguin Reef, we headed out to the Babata Sinkhole site, hopped out for a nice lunch break and rest for an hour or so. As we arrived we had looked down into the water of our next dive, so we were again excited and keen to hit the water. Babata Sinkhole did not let us down. This dive started with some caves and swim-throughs where we were introduced to the "Disco Scallops". They were so cool. When we shone our torches into the cavities in the wall the scallops would light up like a disco. It was like a filament from a light bulb was running between the "mouth" of the scallop and a nice electric show was put on for us. We thought these were very cool.

Our last dive for the day was at the end of the Seghi runway where two warplanes (the P38 & the Dauntless) collided during the Second World War and they lay in 14 metres of water. The water here was quite murky, but still a nice dive to finish off the day. It was at this site that we saw a Manta Ray in the far distance, in murky water swimming away from us. Hmmm, this was the only one we saw for the whole trip - literally "the one that got away" as far as photographers were concerned. These two anemone fish were "standing guard" at the wrecks, protecting our maritime history. 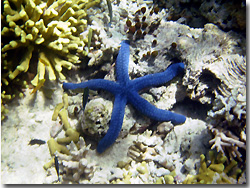 Our last day of diving was one of excitement as well. Kevin & Deb dived the Bottom Of The Channel, otherwise known as "B.O.T.C.H" which was a shore dive off the dive shop jetty, straight down to 36 metres where we were met by what can only be described as an underwater sand dune that rose about 5 metres from the bottom. It was quite amazing to sit there and admire this topography for a little while, and then to peer over the edge as the depth dropped suddenly to about 2000 metres depth. After this it was a nice swim along the wall for the rest of the dive. I was very disappointed that I couldn't take a photo of the "Sand Dune" as I had not put the camera on the proper setting before hitting the water. Grrrrr!

When we arrived back, we were treated to a Shark Feed at the Welcome Jetty. From behind the safety of the jetty pylons we watched the amazing show as the reef sharks came in to collect their feed. This is not a regular feed for the sharks; they only do this when they get a collection of fish scraps from the restaurant. It was great fun to watch. 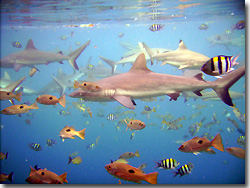 After the feed, and a rest for a couple of hours it was time for our long-awaited night dive. We dived at Uepi Point which was a site that we had dived during the day a few days earlier. It was here that we found some very large crayfish, and witnessed the sleeping beauties (fish) snoring away as we explored their world at night time. As well as very huge crayfish, we also witnessed the feather stars walking along the rocks under the cover of darkness, which I have to say, was quite amusing to watch. Some small lionfish and a cowrie shell also "lit up" our dive as we enjoyed the nice cruisy dive at around 15 metres for about an hour.

And so ended our diving for our trip. After 16 dives for the trip we were all quite well dived, well fed, and well looked after.

Now as for the food and the service, both excellent. For breakfast we had a full complement of cereals, fruit, and other items on order such as baked beans, pancakes, hash browns, eggs (just about any way you could possibly like them) and fruit juice. Lunch was served at our rooms every day, so we could sit around and relax, and tell stories about our dives. 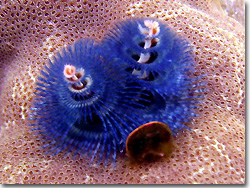 Dinner each night started with the soup of the day, followed by a delicious variety of exquisite dishes including seafood such as crayfish, crab, fish, sashimi, as well as vegetable stir fries, curries, chicken dishes, rice dishes, pasta - the list goes on and on. We were very satisfied by the end of each meal, and never went hungry. Oh and for those "in between" dive munchies - there was always the packet of "Scotch Finger Biscuits" in the fridges in our rooms.

On our last day (non-dive day) we went for our final snorkel in the morning for a good couple of hours, around from the dive shop jetty, around the point and back again. We saw a few large schools of very large hump headed wrasse, a large family of black and white spotted anemone fish, thousands of Christmas Worms "lighting up" the sponges they inhabited, and of course our friends who we had come to know so well, the reef sharks.

In the afternoon, one of our dive guides, Pita, took us to a waterfall on another island and for a tour of the village where his father and two sisters lived, which was a great education and a great way to spend the rest of our day.

A couple of our group went fishing and came back with some very respectable sized tuna and mackerel to show for their efforts.

We would like to say a very big "Thanks" to Jill, Gail and Ian who were our hosts at the resort and of course to our dive guides Dilly, Pita, "Robert A", "Robert B" and all the other crew and staff for looking after us so well.

Uepi Island is definitely a dive destination we will recommend to all of our friends. Awesome diving, fantastic location and great staff!

My next meal must be out there somewhere...

My next meal must be out there somewhere...