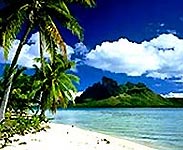 Geographically, Polynesia may be conceived as a triangle with its three corners at Hawai'i, New Zealand, and Easter Island. The other main island groups located within the Polynesian triangle are Samoa, Tonga, and the various island chains that form French Polynesia.

However, in essence it is an anthropological term, referring to one of the three parts of Oceania, the others being Micronesia and Melanesia, whose pre-colonial population generally belongs to one ethno-cultural family as a result of centuries of maritime migrations.

Polynesia divides into two distinct cultural groups, East Polynesia and West Polynesia. The culture of West Polynesia is conditioned to high populations. It has strong institutions of marriage, and well-developed judicial, monetary, and trading traditions. It comprises the groups of Tonga, Samoa, and the Polynesian outliers. Because of a strong readiness to accept new ideas, and due to relatively large numbers of Christian missionaries in the islands, Polynesians readily adopted Christianity.

Storm Case iM2600
Protect your valuables even under the most adverse conditions. Nothing stands up to the power of Storm Cases. Watertight, padlockable, made in the USA, and unconditionally Guaranteed for Life.
From $AU 279.00
5% Cardholder's Discount!