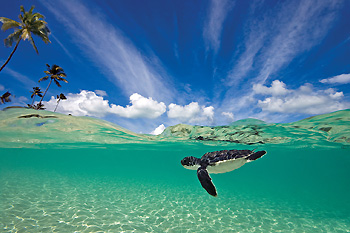 Sea Turtles can live to be 100 years old, but most don’t survive their first few days. In the wild, the tiny hatchlings typically encounter a gauntlet of predators as they hatch and make their way from beachside nests to open water, and they remain especially vulnerable those first few months of life. When nature is in balance, this attrition is a normal part of the circle of life. But when turtles become threatened by factors such as habitat loss, or predators like fish and birds, they may need a little extra help to maintain a normal population. This is where Wakatobi Dive Resort has stepped in.

A head start for turtles 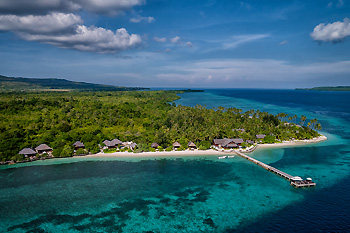 For the past couple years we have continued to witness increasing numbers of adult turtles on the surrounding reefs, and particularly on the House Reef at Wakatobi. And we’re delighted at finding more and more female sea turtles that make their way onto the beach at night to lay eggs. One might conclude that due to the decline in habitat elsewhere, combined with Wakatobi’s ongoing protective measures for our waters, the turtles are coming here to find the environment they need to thrive. Therefore, we put a head start program into place and built a turtle nursery, which is managed by resort staff, to help give these tiny ancient mariners a better chance at survival in the wild. 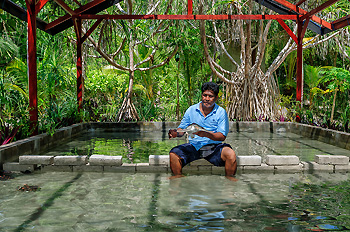 Recently we are finding more and more female sea turtles laying eggs on Wakatobi’s beach at night. Using their hind flippers, they will dig a circular hole in the sand (typically 40 to 50 centimeters (16 to 20 in) deep). Afterward, the female fills this hole, or nest, with a clutch of soft-shelled eggs – one by one until she has deposited around 50 to 200 eggs, depending on the species. Some species, like the hawksbill turtle, have been reported to lay 250 eggs. Once the eggs are layed, she re-fills the nest with sand, smoothing the surface until it is relatively undetectable visually. The whole process takes thirty to sixty minutes. She then returns to the ocean, leaving the eggs untended.

When the Wakatobi security team patrols the beach at night they look for signs of new nests. When one is discovered, a small fence is erected around the nest site to stop people from accidentally walking over it and to keep would-be predators out. The fences remain in place until after the baby turtles hatch, which could take from 45 to 70 days, depending on nest conditions and temperature. Once the hatchlings emerge from their shells they make their way to the surface. 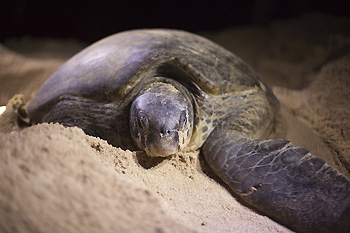 Under normal circumstances, once the baby turtles have succeeded in digging themselves out of the sand, they make a mad dash for the ocean and do not slow down until they hit open water. However, at this time their life faces its greatest perils – from a gauntlet of predators in the sand (like crabs and lizards) to birds in the air (seabirds and wading birds), and fish on the reef. But those slated for Wakatobi’s nursery will take a different path.

Once signs of a hatch are noted, the tiny turtles are collected as soon as they emerge, and moved to the holding tanks. The Wakatobi nursery was created when a former greenhouse near the staff quarters was fitted with a large water tank with a seawater circulation system. The tank is divided into two sections, with one half reserved for the smallest turtles, which are only 5 to 6cm long when they hatch. The youngsters are fed a diet of salad, seagrass and a little raw fish. Water is changed regularly to keep the tanks clean, and they are moved to the other half of the tank as they grow. In all, they are kept for about a year. 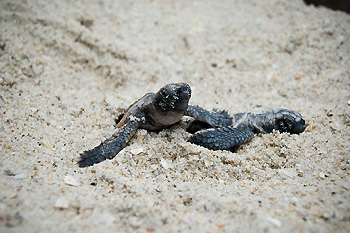 Ancient mariners of the sea

“More turtles were hatched in Wakatobi in 2014 than ever before. So far, all the turtles raised in the hatchery have been green sea turtles,” said Sayafrin. 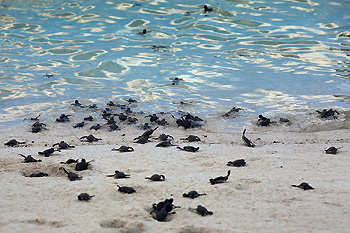 Often referred to as “ancient mariners,” sea turtles will migrate hundreds of miles between feeding and nesting grounds; some swim more than 2,600 kilometres (1,600 mi) to reach their nesting beaches. Sea turtles spend much of their first five years within the open ocean. Adults frequent inshore bays, lagoons and shoals with lush seagrass beds like those fronting Wakatobi Dive Resort. They feed on a wide range of animals and plants, and are mostly omnivorous in their adult life, except for the green sea turtle, which is herbivorous, changing from a carnivorous diet when they are young. Hawksbill turtles are regular reef dwellers because they like to feed on sponges and other organisms that live on the reefs. Hence, we often see hawksbills at Wakatobi.

Green sea turtles are still considered to be an endangered species throughout much of their range, so the youngsters are a welcome addition to the wild population. One of the identifiable features of the green turtle is their blunt, bullet-shaped head. As compared to a hawksbill, which sports a shell that is more serrated on the back, the green turtle has a smooth shell. Hawksbill turtles are also a common site on Wakatobi’reefs.

“The day we find hawksbills nesting on the beach we will be there to give them a helping hand as well,” said Sayafrin.

"When we release the turtles, at about a year, they are more prepared to survive in the wild," according to Sayafrin. 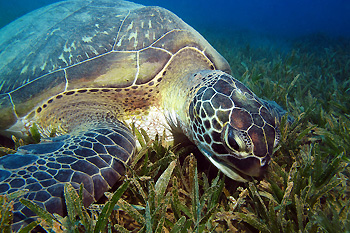 By the time they are ready to be returned to the ocean, the young turtles will be 25 to 30 cm in length, and much more capable of surviving in the wild. They are on their way, but it will take almost another two decades for them to reach full sexual maturity.When they do reach adulthood they are marvelous divers, and some, such as green turtles, are capable of staying under water for as long as five hours even though the length of a feeding dive is usually five minutes or less. Their heart rate slows to conserve oxygen: nine minutes may elapse between heartbeats.

Releases take place near the original location of the nest. Several of the first batches of turtles released came from a trio of nests located on the south beach, beyond the guest bungalows. Two more recent nests were laid on the northern part of the beach directly in front of Bungalow Three. 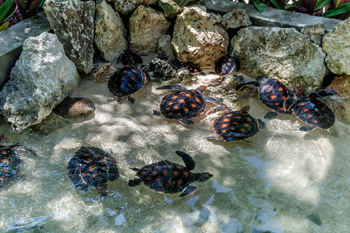 In addition to this new nursery, Wakatobi’s Collaborative Reef Conservation Program has made great strides in maintaining the healthy status of the surrounding reefs. This area, which stretches over 20km (12.5 mi) of reef and dozens of dive sites, was also designated a UNESCO Heritage Site in 2012. All these measures add up to a favorable environment for sea turtles to thrive.

Wakatobi's nursery program will allow both humans and sea turtles to coexist on the resort’s white sand beach, while also ensuring that future generations of turtles will survive to delight divers when they come together on the reefs. The turtle nursery is now one of the highlights of the resort tour, which is offered to guests each week. Guests are also welcome to visit the nursery at any time on their own.

01 – Baby turtle swimming in front of Wakatobi
A baby turtle cruises past Wakatobi resort on the way out to the open sea. With the help of caring staff and a dedicated turtle nursery, we now offer these tiny mariners a better chance for survival.  Photo by William van de Wouw

02 – Aerial of Wakatobi beach and house reef
For the past couple years we have continued to witness increasing numbers of adult turtles on the surrounding reefs, and particularly on the House Reef at Wakatobi. Photo by Didi Lotze

03 – Sayafrin at Wakatobi’s turtle nursery
The primary caretaker for the turtle nursery is Sayafrin (above holding a baby green turtle). Sayafrin started out as a Wakatobi dive assistant 7 years ago and is now one of the resort’s supply managers.  Photo by Didi Lotze

04 - Large female Green turtle laying eggs on the beach
The same white sand beach that resort guests enjoy are also used by momma sea turtles, who come ashore under the cover of darkness to dig nests and bury a clutch of eggs in the sand, such as this large green female. Photo by David Evison

05 – Hatchlings emerging from the sand
As hatchlings emerge from their shells, they instinctively dig their way to the surface. Photo courtesy Wakatobi Dive Resort

06 – Hatchlings running for the open water
Baby turtles will typically make a mad dash for the water once they have dug themselves out of the sand. Photo courtesy Wakatobi Dive Resort

07 – Green turtle munching on the seagrass in the shallows fronting the resort
Unlike other sea turtles, the green sea turtle is herbivorous, changing from a carnivorous diet in their early stages.  Photo courtesy Wakatobi Dive Resort

08 – Baby turtles in the nursery tank
The nursery holding tank is divided into two sections, with one half reserved for the smallest turtles, which are only 5 to 6cm long when they hatch. Photo by Didi Lotze