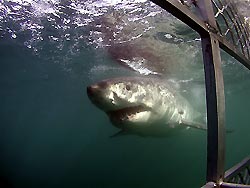 This was my first time diving with Calypso Star Charters and Captain Rolf who had come highly recommended. Rolf has taken delivery of this magnificent new charter vessel, Calypso Star. With a length of 56 ft, she is a very comfortable vessel with good cabins (sleeps eight), two heads (bathrooms to land lovers), lounge/dining and plenty of deck space for gearing up - all this and not a whiff of burly. Rolf and Andrew (his permanent deckie) keep the boat spotless.

On arrival at Dangerous Reef after anchoring, the tuna oil bags were set and the burly process began. A much more civilized burly method to past trips, the crew do it all - I did not have to wear the 'burly coat' and do my four hour burly watch! The shark cage was made ready and all we needed now were the Great Whites. Rolf has two cages aboard allowing up to four divers to be in the water at any one time, this is so much better than a roster system - at least you have a good chance of seeing a shark if they are not there for long.

We got the briefing of the do's and don'ts in a shark cage plus most importantly the hooker set-up and entry and exit procedures and within two hours of arriving had our first shark. Quick check out of the shark - WOW it is enormous! Finally geared up and ready to go, is the shark still there? Yes, now there were two.

The excitement was so great, I was finally, after five attempts going to come face to face with these amazing creatures. The cage was pulled to the transom deck - this was it! First breath on the hooker system - tuna oil! In all the excitement I forgot the 'breath out to clear regulator rule'. Regulator cleared, feet under the bar on the floor of the cage, hands inside and within seconds out of the distance she came, all five metres of Great White Shark! I cannot repeat what word came out.... It is one of the most amazing creatures you could ever wish to see. It is so graceful yet so powerful, it captures your soul, the black eye piercing, with no emotion. I was so taken with these animals that I forgot to even take pictures for the first ten minutes, you just cannot take your eyes off them. As they cruise by you think - wow - they are huge, but when they go under the cage and you see they are almost as wide as the cage you are in, the enormity becomes apparent. The first experience of the jaw opening around the corner of the cage was awesome, you can see right down the throat and the mouth is open wide enough to fit a small person in. I could hardly believe what I could see, it is so hard to take your eyes of the deep, black hole that is their eye, and it just draws you in. An hour went by and it felt like 10 minutes, had I really been in the cages that long. Time to get out, a simple task, climb the steps at the side of the cage, the lid is lifted and you crawl onto the transom deck where Andrew and Rolf are waiting to help. YES, I had finally done it - seen a Great White Shark and yes it was worth the wait.

Over the next few days we had ten sharks in total. There was never a time when we did not have at least one shark around the boat. We dived three times a day, each dive very different as each shark has its own behavior pattern. We got to know them all by name and tagged five new sharks. I think the most impressive thing apart from the Great White Sharks was the love and pride Rolf has for his operation, he genuinely cares for your needs and well being and does it with a smile.