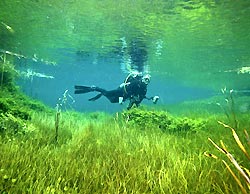 Mt. Gambier in South Australia is a region filled with stunning freshwater lakes filtered by limestone, cave diving and extinct volcanoes. For divers without Cave qualifications Ewens Ponds beckons. The Ewens Ponds Conservation Park is 10 kilometres east of Port MacDonnell. Access to the ponds is via a dirt road that is signposted from Mt Gambier and Port MacDonnell. As you approach you will be travelling through bush and farmland scratching your head wondering what you are doing here!

Ewens Ponds can be dived all year round however it is best to dive on sunny days with no wind. I would also recommend getting to the site early and being the first in the water as previous divers may stir up the bottom causing visibility to decline.

The ponds are a series of three connected fresh water shallow ponds that are continuously fed by spring water. The shallow areas of the ponds (0-6 metres) and channels are covered in aquatic plants where small fish species such as freshwater galaxids and juvenile bream can be found. There is a slight current that runs through the ponds that will help carry you through the shallow channels that connect the ponds together. The narrow channels are located at the southern end of each pond. Drifting through the channels is a fantastic experience as you are engulfed by plants and aquatic weeds.

The highlight is the visibility! The first time I put my head underwater at Ewens Ponds I was shocked; the water was so clear it felt like I was diving in air. It is not uncommon to be able to see from one side of the pond to the other, a distance of over 80 metres.

Ewens Ponds is a good location to have a model diver; having a diver in the photos gives an excellent perspective of how clear the water is. Some of the aquatic life in the ponds includes the spiny crayfish Euastacus bispinosis and the rare Ewen's pygmy perch (Nannoperca variegata) and both can be very elusive to photograph.

Probably the only real hazard is the water temperature as the water is chilly (10 â 15 degrees). Wear a thick wetsuit or drysuit however remember that you are less buoyant in freshwater than salt so take some weight off the belt. Caution should also be taken during summer when walking along the track and in the carpark as red bellied black snakes may be encountered.