Tioman Mega Dive - too much fun in the sun 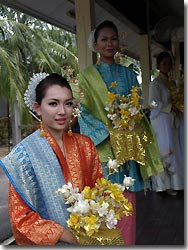 After a 'week in the city' to attend MIDE'07 I couldn't wait to get my bare feet in the sand and to move from talking about diving to actually doing it. 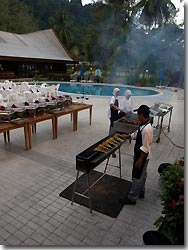 I was part of a number of international press who were invited to attend this new anual dive event on Tioman Island - which for those who don't know is located in the South-East of mainland Malaysia. A 4 day festival which promised lots of activities, diving and other fun in the sun.
Flying Berjaya Air directly from KL to Tioman we were there in a flash and welcomed by a whole ceremony of women in beautiful traditional dresses as well as the Tioman Mega Dive volunteer girls ... who were also nicely dressed, yet slightly less traditional.

We were taken to Berjaya Resort which is the largest and only 5-star resort on Tioman Island, and a very nice place indeed. Featuring a full dive shop with its own jetty and a number of dive boats, a few swimming pools, golf course and most importantly the sunken pool bar ...
Tioman considers itself as one of the 10 most beautiful islands in the world and indeed there are amazing landscapes, beaches and of course beautiful people all around. 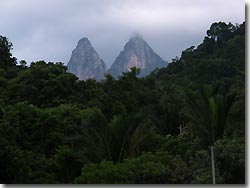 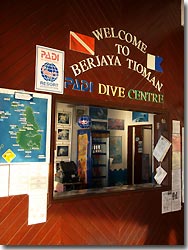 It was great to meet so many other people who's job and passion it is to 'make the world into divers' and keep divers diving, including the guys from Scuba Diver Australasia, FINS, Action Asia, X-Ray Mag, DivePhotoGuide, DiveZero and even the Russian Octopus Magazine.

Amin, the main organiser of this event managed to get some amazing sponsorship from Tourism Malaysia, Berjaya Hotels & Resorts, PADI and a number of diving organisations and the amount of local and international press attending this event was phenomenal. 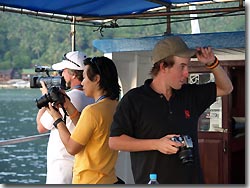 As an event organiser myself (which is for the annual Byron Underwater Festival) I know how much effort it is to organise proper sponsorship.

The event itself was scattered around the island - many of the 16 local dive centres participated and our schedule was tightly packed with diving, beach games & parties as well as some land based exploring of the island. The Mega Dive Program included an underwater treasure hunt where 'real' treasure chests were hidden. around the dive sites of the island and Mega Dive participants could dive away with 1000s of dollars worth of amazing prizes. Like any 'proper' dive event there was of course a photo competition again with fantastic prizes and with the underwater photo legend Mathieu Meur giving talks on how to improve your shooting. 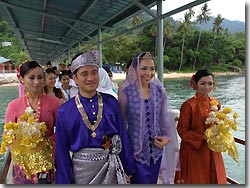 One of the more novel things to happen at Tioman Mega Dive was a traditional Malay underwater wedding - now it's not that Malay people traditionally get married underwater ... in this showcase one couple (who actually in this case were not a real couple) dressed up in traditional Malay dress and sat underwater in about 5 metres of water in what was unfortunately tragic visibility. There were plenty of underwater press trying to get a photo and many onlookers on the pier - all in all an event that I hope will be more successful in the coming years ...

The long standing annual Tioman crown of thorns clean-up was also integrated into the Mega Dive Event this year and over 700 crown of thorns seastars were collected and destroyed to save the reef around Tioman Island. 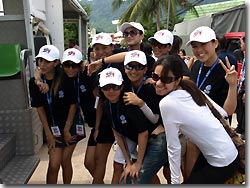 Other Mega Dive Events included a questionable 'Miss Tioman Mega Dive Competition' ... I am not so sure if that is an appropriate thing to do these days plus considering that Malaysia is 70% Muslim ... but of course the participants were all stunning :-).
The events where participants around Tioman were supposed to come together for beach parties, beach games and the TMD-finale were quite poorly visited and there is quite some work to be done if this is to turn into a successful annual event.

All in all I had a very good time especially catching up with other people in the dive industry that you normally only briefly meet at dive shows. Here we could actually dive together and spend some time speculating about the future of diving ...