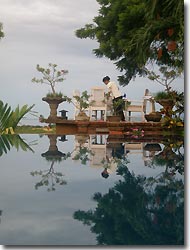 After two weeks of diving around Ambon and the Banda islands, northern Bali offered the perfect place to chill out. A peaceful stretch where you can experience the real Balinese lifestyle, it's a world away from the frantic mass tourism of Kuta. 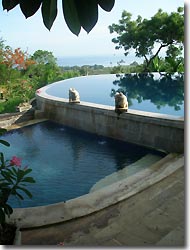 From Denpasar, we made our way across the mountains to the Zen Resort Bali, on the north coast not far from Lovina. This was to be our base for six nights. Passing Kintamani, we took in views of the active volcano Gunung Batur and Lake Batur, and shared the winding road with monkeys, cows and goats.
Overlooking the coast, Zen Resort Bali is set amid tropical gardens that form a paradise so tranquil that it is impossible not to relax. As worries slip away and peace of mind effortlessly replaces them, it's hard to remember what stress felt like. 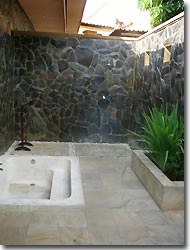 The resort was set up as an integrated Ayurvedic health and nature retreat to offer guests a complete break from everyday life. It aims to rejuvenate the mind, body and spirit using concepts of holistic health and combining the best of Zen philosophy, Ayurveda, yoga, pranayama (breathing) and meditation.
A one or one-and-a-half-hour Ayurvedic treatment with two therapists at the resort's spa is a guaranteed route to relaxation and rejuvenation. 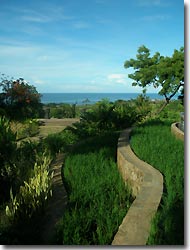 Guests can choose any combination of the therapies and practices on offer. We discovered a one or one-and-a-half-hour Ayurvedic treatment with two therapists at the resort's spa was a guaranteed way to relax.

The resort's Balinese-style luxury rooms have comfortable verandas and an outdoor shower and bath. Overlooking the Balinese sea, they are the perfect complement to the relaxing ambience of the physical environment. A short walk from your room is the pool and outdoor restaurant, where guests can enjoy a mix of Western and Balinese food as well as, surprisingly, local wines.

Indeed, the area between Permuteran and Lovina, where the resort is situated, includes a wine estate. Hatten's Wines operates about 15 hectares of prime vineyards, where it cultivates red and green grape varieties that grow well in the climate.We tried Hatten's Aga Red, Aga White and a rosé, all of which were very drinkable. The range includes other whites as well as sparkling wines.

And so it was on to the diving, which we discovered matched the superb accommodation. There are excellent reefs nearby, as well as a fantastic wreck, and Puri Jati, or PJ as it is known, is on the doorstep and offers fabulous muck diving.

PJ is a five-minute walk from the resort down through a valley that, with its vivid green rice paddies is the epitome of Bali, on the edge of a black volcanic sand beach.

The beach features a concreted area surrounded by trees that provide shade for divers during their preparations, and for resting in between. There are gear benches, camera and dive gear rinse tanks, showers and toilets. Despite these amenities, all our dive gear quickly took on a thick coating of dark sand.

It's just a stroll across the beach and a short swim to the dive site. For a few hundred metres the underwater seascape is a lightly sloping dark sand incline to about 12 metres, followed by a steep drop-off descending into the Bali Sea. At the beginning of our dives the water was quite murky - visibility was less than a metre. Gradually the visibility improved to about 10 metres, which was fine for spotting all the critters for which PJ is famous.

These critters are well adapted to their environment, however, so it takes some time to make out the range of creatures. They are able to either blend in completely with the soft, dark sand, or appear and disappear into it at will. Once we grew accustomed to the site, we spotted a mimic octopus, a blue-ringed octopus, various frogfish, some ghost pipefish, snake eels and crocodile fish. We also saw Ambon scorpion fish, cuttlefish, a wide variety of crabs and shrimps, various nudibrachs and several seahorses - some hiding in the sand, behind rocks, or in tin cans, an old shoe or bamboo sticks.

While muck diving among dark volcanic rock and sand in murky waters might not sound inviting at first, this array of wonderful creatures makes the site a must. We spent two days diving there and as the dives are very shallow we stayed at least one hour, sometimes two, each time - plenty of time to enjoy the critters. After several dives we felt more knowledgeable about the site and knew where to spot what - including fishermen. Don't be surprised if you're there to see a fishing net dragging through the water across the sand just metres away.

Two hours drive from our resort, Tulamben boasts the wreck of the USS Liberty, a cargo ship torpedoed by a Japanese sub back in 1942. While being towed to Singaraja, she took on too much water and beached herself in the waters of Tulamben. Nowadays she's a coral-covered wreck that forms a haven for numerous forms of marine life and is probably the world's easiest wreck to dive.

Local beach porters carried our equipment to a rocky beach, where we strapped on our BCD and walked a few metres to the edge of the water; the wreck is just a few meters from the shore.

We had good visibility and hardly any current. The lowest point of our two dives would not exceed 30 metres and we explored the wreck's 120-metre long hull. We spied a resident school of big eye trevally as well as a variety of creatures hovering around the anemones, gorgonian and coral-encrusted remains of the ship.

Our first dive began with a swim through an eel garden at around 8 metres. From there we went east to the stern and swam through the rudder at about 10 metres, past portholes at about 15 metres, then explored the quarterdeck and descended from 2 to 20 metres. The stern gun is located at around 20 metres and a winch with a steel cable at 25 metres. Continuing north, we explored the collapsed bulkhead at around 20 to 25 metres, and the Danforth anchor at 28 metres. We

entered the wreck below the foredeck, where we were amazed by huge formations of beautiful soft coral, tubestrea and gorgonian fans. Not far from the foredeck gun, at around 20 metres, we came across a barrel sponge covered with spectacular fans. Continuing on, we found the anchor chain at 30 metres.

The return trip to the stern on the western side of the wreck offers a side and top swim-through into the hold, where we saw a school of trevally. With a final swim-through past the propeller shaft tunnel, we reached the eel garden again and made our way back to the shore. On our second dive we took the same route but spotted different critters this time around.

The trip to Tulamben to dive the wreck of USS Liberty is well worthwhile, offering easy access, low depth, a variety of fish and interesting critters, and beautiful corals. 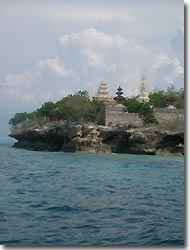 One of Bali's top dive sites would have to be Menjangan Island. It was a good 50-minute drive from our resort to a small area where we boarded a local boat from which we would be diving. The island and its surrounding coral reefs are part of the Bali Barat National Park, comprising 780 square kilometres of protected area. The island itself is surrounded by pristine white sand beaches. The coral formations close to the shore are fantastic for both diving and snorkelling.

The coral reef has deep drop-offs of up to 60 metres and byzantine rock formations, including a variety of caves, and hard, sponge and soft corals. This environment makes a wonderful habitat for a variety of fish, including groupers, moray eels and batfish. They're joined by an array of smaller creatures - gobies, frogfish, scorpionfish, lionfish, blennies, and nudibranchs.

Our wall dive was the more interesting one in this area - not as good as, say Palau, but still enjoyable. It is reputed to be the best wall dive around Bali. Among the abundant fish life, we noted the great diversity of gorgonian fans on the walls. Swarming with medium and small fish, the walls are full of small nooks and crannies, overhangs and larger crevasses, and covered with large soft corals, gorgonian fans and huge sponges. 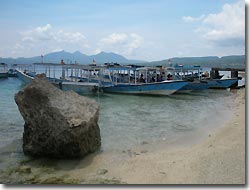 On our second dive, we took in some shallower walls as well as a very large colony of garden eels. A vast, shallow, sandy bottom area is alive with garden eels and full of magnificent hard corals, including large gorgonian fans, and huge barrel sponges. On this dive we also encountered angelfish, lionfish, scorpionfish, anemone fish, trumpet fish and a school of pelagics.
So, Northern Bali is in sharp contrast to the mass tourism areas in the South ... an area which invites to enjoy Bali in its real form and to do some wonderful diving.