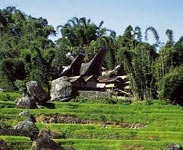 The island (formerly know as Celebes) has a distinctive shape, dominated four large peninsulas. The central part of the island is ruggedly mountainous, such that the island's peninsulas have traditionally been remote from each other, with better connections by sea than by road.

As the largest city in the northeren region, Manado is a key tourist transit point for visitors. Ecotourism is the biggest attraction in Manado. Scuba diving and snorkelling on the nearby island of Bunaken are popular attractions. Bunaken is part of the Manado Tua Marine National Park, which has some of the highest levels of marine biodiversity in the world. Other places of interest are nearby Lake Tondano, Lokon Volcano, Klabat Volcano and Mahawu Volcano.

The Celebes Sea is home to a wide variety of fish and aquatic creatures. The tropical setting and warm clear waters permit it to harbor about 580 of the world's 793 species of reef-building corals, which grow as some of the most bio-diverse coral reefs in the world, and an impressive array of marine life, including whales and dolphins, sea turtles, manta rays, eagle rays, barracuda, marlin and other reef and pelagic species. 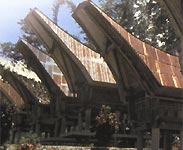 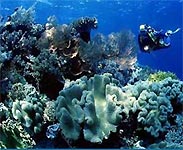 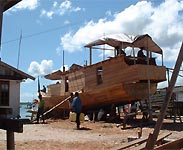 The Bunaken Sea Garden (North Sulawesi): About half an hour by a motorized outrigger canoe from Manado, Bunaken island is a veritable paradise for snorkelers and scuba enthusiasts. The coral reef off Bunaken island is particularly good for that and shouldn't be missed while you're in this region. The drop-off wall at Liang Cove is rare in the world, as it's described by international divers as being spectacular with caves, gullies, and caverns harboring an immense wealth of marine life. The water averages a balmy 28 degrees C and visibility is sensational (over) 30 m. The Bunaken sea garden is rich with colorful tropical marine life.

Sea Garden of Hari Island (South East Sulawesi): In the Indonesia language (Bahasa Indonesia), hari means daylight. Because of the way the sun's rays reflection the water of the sea surrounding this island, the local people call it the Island of Daylight, Pulau Hari. Swimming, boating and other marine sports find a natural home along these shores. Diving to view colorful fish in a sea garden setting of coral is a popular activity.

Coral Reefs and Climate Change - The Guide for Education and Awareness
This book focuses on coral reefs, the astonishing abundance of life within them and the impacts of climate change on this beautiful environment.
$AU 49.50
5% Cardholder's Discount!

Drawing a deep breath, I dive into a primordial sea. My vision opens to a sea of jellies swimming gracefully in a green aquaria, visibility remaining clear at 5m as long as I am careful not to touch bottom and stir up the silt accumulated over the last 19,000 years.

Sea Turtles can live to be 100 years old, but most dont survive their first few days. In the wild, the tiny hatchlings typically encounter a gauntlet of predators as they hatch and make their way from beachside nests to open water, and they remain especially vulnerable those first few months of life. When nature is in balance, this attrition is a normal part of the circle of life. But when turtles become threatened by factors such as habitat loss, or predators like fish and birds, they may need a little extra help to maintain a normal population. This is where Wakatobi Dive Resort has stepped in.