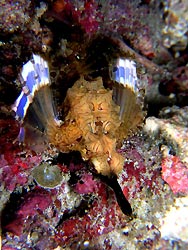 We saw the Dragon Sea Moth (Eurypegasus draconis) at a dive site at Mabul Island. Ribbon Valley to be exact. I took a few shots of this cool little fish a week ago and it is still around now. Hopefully it's gonna stay for a while. 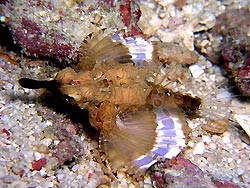 The sea moth is not a common fish you can find around here but they can be expected from time to time around the flat, sandy bottom of Mabul Island and Kapalai Island. I once discovered four Dragon sea moths at Roach Reefs before in the same dive and site. But I don't think you can see any at Sipadan Island.

The Dragon sea moth is one of the strangest fish in the world! Also known as the Little Dragon fish, Short Dragon fish and the Pegasus Sea Moth, this creature actually has the ability to change colors based on its surroundings much like the chameleon. If this wasn't weird enough they also shed their skin like a snake in a single piece! 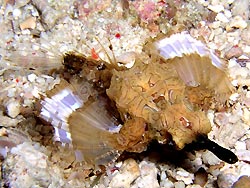 They also have two wing like fins that extend out on either side of their bodies. As you can imagine, all of these strange characteristics make the Dragon Sea Moth a favorite among macro lovers. 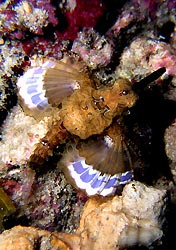 Dragon Sea Moths are not large, only growing to about 6 inch (15 cm) max. From this angle in the picture on the right, you can actually see how it resembles a moth and that's where they got their name from.

Sea moths are distinguished by flattened bodies, the presence of large, wing-like, pectoral-fins and a body encased in thick, bony plates.

Their modified pelvic-fins allow them to "crawl" across the sea bottom where they dwell. Check out the claws at the tip of the wing in the image on the right.

Seamoths are masters of camouflaging but up close you can see just how beautiful the body-patterns look. 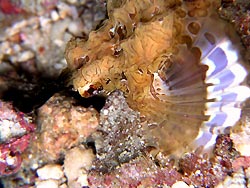 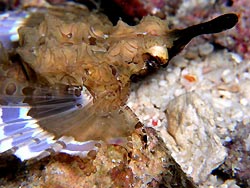 Besides the cool lookin body patterns and wings, big gleaming eyes and all, check out the snout. I guess its been telling a lot of lies and having too much fun with silly Pinocchio. 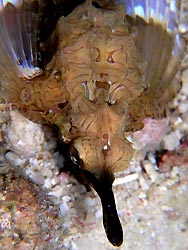 The Dragon sea moth have an elongated snout in front of its jaw. The jaw is highly specialized and can form a tube-like mouth to suck worms and other tiny marine creatures from their burrows. 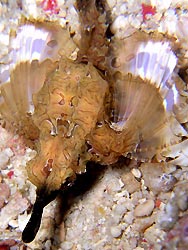 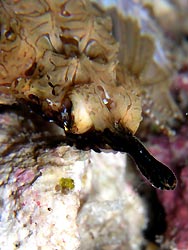 You shall not pass

You shall not pass