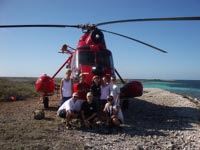 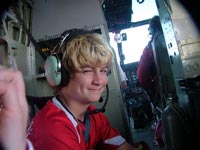 The smell of aviation fuel, the hum of the turbine, the immense noise from the rotor blades, being strapped into a seat are all unusual ways to start a dive trip. Add in 11 students over two days and some very excited teachers, and you have the makings of what every reader of this article wishes school was like when they were there. A day trip to Australia's Galapagos Islands, The Abrolhos Islands, was a unique school camp.

Over the last two years we have taken over 30 young divers, all under 18, to these magnificent islands, and always with a great response. However, six plus hours on a boat in some VERY rough oceans, usually ended with numerous cases of severe sea sickness at each end of the trip. Until now we all assumed that was the price that had to be paid for a look at this ocean wonderland. Then we heard of what Trevor Beaver, at Batavia Coast Dive Academy, had put together in Geraldton!

A new helicopter had arrived in Geraldton, and was looking for a way of keeping it there so that its primary use as a rescue helicopter could be maintained. They offered Trevor a deal wherein they would fly divers to the islands in the morning and back in the afternoon, all at low altitudes so that DCS was avoided. Painted bright red and able to seat eight divers at a time, it was proving to be an ideal dive craft, and a very limited opportunity anywhere in the world.

We opened it up to students and within two days all spaces had been booked. Heading off on the Friday, after weeks of preparation, in the school bus was a very excited group of people, with growing enthusiasm as the 400 plus kilometres ticked by as the realisation that we were getting closer to what could be the trip of a lifetime. Loaded up with food to last the weekend and a trailer load of other bits and pieces, although someone forgot bedding materials due to their excitement. 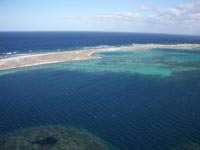 On the Saturday morning we headed off to the airport, with dive gear neatly packed into tubs. Tanks and weights were a no-no due to the weight, and also because a stash of these already awaited us on the islands. Today was the day for the big kids, Upper school kids and the well fed teachers of Mark and Mike. The first sight of the magnificently shiny helicopter was amazing, and almost a little too much for one very excited teacher who started jumping up and down with excitement, and he wasn't heading off until tomorrow.

We were soon acquainted with the helicopter crew of Ron and John, and shortly after they gave us the brief. Ron was keen to inform us that in an emergency we had a number of choices of getting out of the aircraft, and most of these involved doors that seem very keen to fall off. Our life vests seemed extraordinarily simple. Belted in to the seat was easy, unless you are in the co-pilot seat, having wacked my head on the roof. A series of pre-flight checks and we were on the taxi way, just like a plane, and zooming up to take off. Much nicer than a plane and getting airborne is amazingly simple, but I was only in the co-pilot seat. A magnificent sight loomed as we headed away from those we left behind, with Geraldton beneath us, and was quickly replaced by ocean, lots of ocean. Lots of boats seemed to be heading across, but we would be there way before them, in fact we would most likely be leaving as they got there! 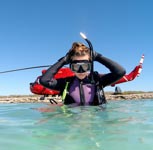 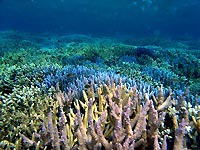 The magnificent turquoise colours of the waters surrounding each of the more than 100 islands that make up the Abrolhos became visible within half an hour of take off. The Southern group and the Easter group became visible at about the same time, but we were really looking for those dots of lands around Leos Island. As we got lower it became obvious that we were close, and young Emily was beside herself as Ron announced over the headset that we had "one very excited girl back here" who had been sitting opposite the open door for the whole flight. As we landed we realised that this very small beach was going to be home for the day. The landing "pad" was only a couple of metres from the water. 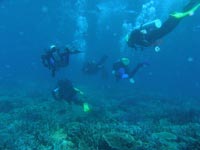 With all equipment ready we entered the crystal waters within minutes and the very short swim to the drop off saw everybody grouped and following the very keen DM Sally. Down to a comfortable nine metres, and the vast fields of staghorn coral, brain coral and myriads of fish were soon with us. Never scared and not in a hurry, neither fish nor divers. The visibility was phenomenal, with the surface still visible from 20 plus metres. As we headed to a cabbage coral patch at 30 metres, Bald-chin Groper and coral trouts tempted us with their "beauty" as they swam casually by in this sanctuary area. At the cabbage patch we saw coral that had growth rings showing its phenomenal age, and sizes that allowed any of us to not touch its edges should we stand in its centre. The water was warm and crystal even at this depth, and after a short stay we headed to the more brightly lit and colourful staghorn to finish the remainder of the dive and degas. After what was a sensual feast we headed back to the entry point, never hard to find as the bright red helicopter was always visible from the surface. 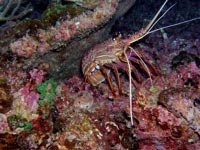 Those who remained in Geraldton were kept busy with a tour of a crayfish factory and its millions of dollars of floor stock that is replaced every three days. A visit to the memorial to the 500 plus victims of HMAS Sydney, a swim, and then to the Museum that is packed with information filled the day before heading back to the airport to pick us up. 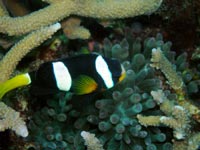 A lunch of crayfish and squid sandwiches, a refill of tanks from the resident compressor and we started to think about dive two. We jumped into the dinghy and rolled out of it just around the corner of "our" island. As we swam across the shallows Emily and Jay were stunned as a playful seal joined them for a frolic as they soon found the channel. Travelling at 12 metres we cruised past at least five separate types of reef, from the familiar staghorn to sheer walls plummeting to whatever depth and finishing with two lumps joining in a stunning wall. As we approached the end I was keen to see a clownfish that are normally common, and was stunned to find hundreds living amongst the corals, along with their bubbletip anemones. This dive was one to remember, and the Samson fish, dhufish and other large fish will stay with all those divers who followed us out of the water to find little lagoon and a moulting seal who wasn't phased about our presence. 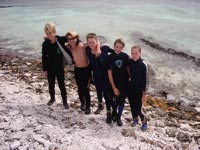 We headed back across the island and packed up. A small bite to eat, a drink and we headed back to Geraldton. The take off seemed even smoother than the airport and we flew low across a tempting surf break and Leos Island. Across the ocean and the red and white lighthouse was soon visible. Some very tired people exited the helicopter to a group that was ready to do it again tomorrow. The weather was holding up for them and we knew that they were about to have one very epic adventure. Everybody knew that if the helicopter stayed we would be doing this again, we're hooked.